The final was the first time since 2001 that neither Argentina and Brazil played against each other for the title. Both Uruguay and Paraguay entered the match having previously won the Copa America multiple times. Uruguay had won the tournament 14 times, and Paraguay had won it twice. Paraguay also reached the final, having not won a single match in the tournament. 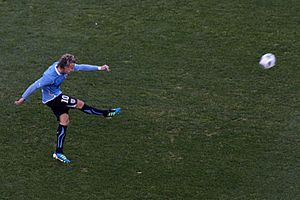 Just 12 minutes into the match, Luis Suárez scores after a Paraguay defender accidentally passed the pall to a Uruguay player. Again another defender mistake caused Diego Forlan to score at the 41th minute, leaving the score at 2–0 at half-time.

Diego Forlan would later score again at the 89th minute, to finish the game off at 3–0. The game finished with 4 Uruguay players and 2 Paraguay players receiving a yellow card.

All content from Kiddle encyclopedia articles (including the article images and facts) can be freely used under Attribution-ShareAlike license, unless stated otherwise. Cite this article:
2011 Copa América Final Facts for Kids. Kiddle Encyclopedia.