The 2014–2016 Turkish judicial purges were purges of the judicial system of Turkey that took place in January 2014 and July 2016 during the presidency of Recep Tayyip Erdoğan. In January 2014, 120 judges and prosecutors were reassigned during a major corruption enquiry and on 16 July 2016, 2,745 judges were dismissed immediately following the 2016 Turkish coup d'état attempt. 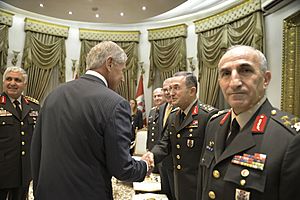 U.S. Secretary of Defense Chuck Hagel shaking hands with General Erdal Öztürk but Öztürk was arrested in connection with the failed coup

All content from Kiddle encyclopedia articles (including the article images and facts) can be freely used under Attribution-ShareAlike license, unless stated otherwise. Cite this article:
2016 Turkish purges Facts for Kids. Kiddle Encyclopedia.