375 Pearl Street, also known as Intergate.Manhattan, the Verizon Building, and One Brooklyn Bridge Plaza, is a 32-story office and datacenter building in Civic Center. Lower Manhattan, New York City, at the Manhattan end of the Brooklyn Bridge. The building was built for the New York Telephone Company and was completed in 1976. In 2016, the building underwent a renovation. 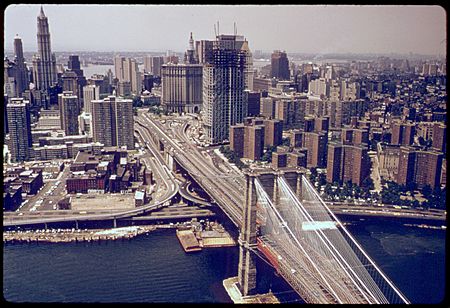 The building under construction in 1974.

The building was built for the New York Telephone Company and was completed in 1976. The building originally appeared windowless but had several 3-foot-wide slits (0.91 m) (some with glass) running up the building. As it approached completion, The New York Times architecture critic Paul Goldberger decried it as the "most disturbing" of the phone company's new switching centers because it "overwhelms the Brooklyn Bridge towers, thrusts a residential neighborhood into shadow and sets a tone of utter banality."

In the 1990s and 2000s, Verizon switching operations included a small DMS-100 telephone exchange and a Switching Control Center System. The building's CLLI code, its identification in the telecommunications industry, was NYCMNYPS. The Pearl Street CS2K softswitch was the recipient of voice traffic from decommissioned legacy switches in the city.

The building played an important part in recovering service to the New York City Police Department following the September 11, 2001 attacks. Prior to May 2002, the building featured the logo of New York Telephone and Bell Atlantic, but that month, that sign was removed and replaced with the logo of Verizon.

Taconic had announced plans to dramatically change in the facade in which a curtain wall designed by Cookfox is to be built. The New York Times wrote:

Paul E. Pariser, co-chief executive of Taconic, said a reporter had told him: 'Mr. Pariser, you have a challenge cut out for you — turning a G.E. dishwasher into an office building.' I like that challenge. 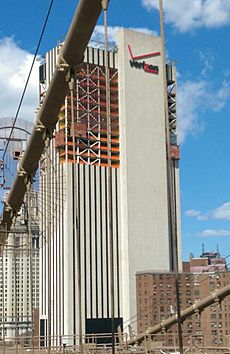 The building as seen from Brooklyn Bridge, under renovation in March 2016

In early June 2011, Sabey Data Center Properties, the largest privately held developer, owner, and operator of data centers in the United States purchased the deed in lieu of foreclosure from M&T Bank for $120 million, considerably less than what Taconic had paid a few years earlier. Sabey intends to redevelop the property as a major Manhattan data center and technology building. The building is now referred to as Intergate.Manhattan.

John Sabey, president of the company, said they were excited to be part of lower Manhattan's "ascendance as a world capital for data-based enterprises of all types." He said Intergate.Manhattan would appeal to "new scientific, academic and medical research centers" in addition to data center tenants.

"The largest areas of growth for data centers are in the financial, internet-based service and networking, insurance, and healthcare sectors, particularly in life sciences research," said Sabey. "Mission critical computing in these areas demands varying levels of availability and latency sensitivities. Indeed, the most infinitesimal delay in a single computer operation can be harmful. For these enterprises and for multi-national companies originating in Europe and looking to establish a North American data center location, New York is typically a prime choice."

On April 3, 2012, the online version of The Daily Telegraph showed 375 Pearl Street ranked 20th in a series of "the ugliest buildings in the world".

In late 2016, the building was renovated. The limestone walls on the top 15 stories were removed and replaced with plate glass panels to improve the building's aesthetics and attract traditional office tenants.

All content from Kiddle encyclopedia articles (including the article images and facts) can be freely used under Attribution-ShareAlike license, unless stated otherwise. Cite this article:
375 Pearl Street Facts for Kids. Kiddle Encyclopedia.