Kids Encyclopedia Facts
Not to be confused with 889 Broadway, also known as the Gorham Manufacturing Company Building.

390 Fifth Avenue, also known as the Gorham Building, is an Italian Renaissance Revival palazzo-style building at Fifth Avenue and West 36th Street in the Midtown Manhattan neighborhood of New York City. It was designed by McKim, Mead & White, with Stanford White as the partner in charge, and built in 1904–1906. The building was named for the Gorham Manufacturing Company, a major manufacturer of sterling and silverplate, and was a successor to the former Gorham Manufacturing Company Building at 889 Broadway. The building features bronze ornamentation and a copper cornice.

390 Fifth Avenue was occupied by the Gorham Manufacturing Company between 1905 and 1923. It was then home to Russeks department store from 1924 to 1959, and then Spear Securities from 1960, who changed the street level facade. It was designated a New York City landmark in 1998, after the lower floors were significantly altered from their original design.

In 1884, the Gorham Manufacturing Company opened its New York City showroom on 889 Broadway, at 19th Street in the Ladies' Mile Historic District. By the first decade of the 20th century, factories and lofts were opening in the area around 889 Broadway. Furthermore, stores on Ladies' Mile began to move further north into larger space. Development was centered on Fifth Avenue north of 34th Street, where new department store buildings were quickly replacing the street's brownstones.

The Gorham Manufacturing Company was one of the earliest companies to consider moving uptown. In 1903, its president Edward Holbrook leased the future site of 390 Fifth Avenue, at the southwest corner with 36th Street. At the time, much of the land was owned by John Jacob Astor IV. Holbrook hired McKim, Mead & White for the building's design, with Stanford White as principal. Holbrook requested that the Fifth Avenue building be fireproof, and that its layout be able to accommodate the "needs of a great commercial enterprise". Because the building was not intended to host any other tenants, 390 Fifth Avenue was designed entirely to the Gorham Manufacturing Company's specifications. Fireproofing was considered especially important due to the value of Gorham's merchandise; when it opened, one journal estimated that while the building was worth $1.25 million (equal to about $30 million in 2018), its merchandise was worth twice as much.

390 Fifth Avenue opened on September 5, 1905. The opening took place "within days" of that of the neighboring Tiffany and Company Building. Gorham closed its Broadway store the next year.

In 1923, Gorham moved uptown and sold both the building and its land lease. The buyer was the Martic Realty Company, which represented the women's department store, Russeks. Prior to moving in to the property, Russeks made major changes, which included adding reinforced concrete floors, as well as a new shop window, and expanding a four-story section of the building on 36th Street to eight stories. Russeks moved into 390 Fifth Avenue in 1924. Another annex was added to the building's southwestern portion in 1936, within the interior of the block. The next year, 384 Fifth Avenue was connected to 390 Fifth Avenue internally, and the facade of the former was rebuilt with a limestone base and ground-floor display windows.

Spear Securities took over the lease on the land in 1949. Russeks continued to occupy the building until 1959, when the company announced the closure of their Fifth Avenue store after five years of losses. The building was then also sold to Spear Securities. Subsequently, 390 Fifth Avenue was extensively remodeled. The building's colonnade and carved-marble sheets were removed as part of the renovation, and a glass facade was installed along the lower stories. Herbert Tannenbaum, the architect in charge of the renovation, later said that he had wanted to save the carved marble and the colonnade. Both the building and its lease were transferred to Jacques Schwalbe in 1970. Twenty-six years later, the building and its lease were given to 390 Fifth LLC, a limited liability company affiliated with the Schwalbe family. Around the same time, in 1995, changes were made to the storefront facade. In December 1998, the building was designated as an official city landmark by the New York City Landmarks Preservation Commission. 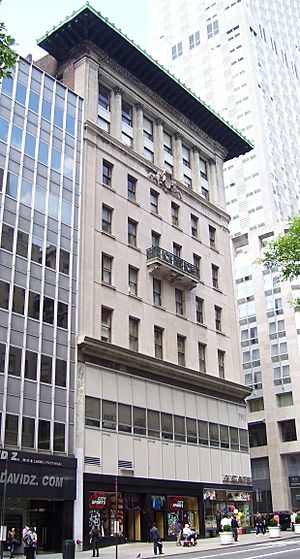 390 Fifth Avenue is an eight-story building, designed in an early Italian Renaissance Revival style, with a facade of granite and white limestone. The structure measures 67 feet (20 m) on Fifth Avenue by 167 feet (51 m) along 36th Street. An annex, about 12 feet (3.7 m) wide with a similar facade to the original construction, is located west of the main building. In his notes, Write stated that he wanted the design to have "elegance and simplicity in both the exterior and interior."

Along Fifth Avenue and 36th Street (respectively located to the east and north), the facade is made up of three horizontal segments: the base on the lowest two stories; the middle four stories; and the loggia-like attic section on the highest two stories. The sections of the facade are divided by three sets of string courses. The facades to the south and west, which face other buildings, are made of brick.

The entirety of the base originally had an arcade of arches running along it. The arches were supported at ground level by Ionic columns. There was a 8-foot-deep (2.4 m) cornice above the arcade. Bas-reliefs, removed by 1936, were in the spandrels at the top of the arcade. There were three arches on the Fifth Avenue side and seven arches on the 36th Street side. Most of the easternmost arch on 36th Street, and all of the arches on Fifth Avenue, were replaced with a storefront composed of an aluminum and glass grid. The remaining arches on 36th Street were preserved, with the main entrance to the building being located within the westernmost arch. Each of the arches at the base corresponded to two vertical window bays on the upper floors. There are six bays on the upper floors on the Fifth Avenue facade, and 14 such bays on the 36th Street facade.

When the building was erected, Gorham supplied the bronze ornamentation for the facade on the top floors, fifth-floor balconies, and ground level, manufactured to designs by White. The ornamentation accounted for 10% of the building's $1.25 million construction cost. The copper cornice at the top of the building, once having been polychrome and gilded, has corroded to a green color. The middle floors were more simple, though a cartouche with lions was installed on the top of the fourth floor.

On the cornice above the sixth floor of the Fifth Avenue facade, there is a frieze, with a cartouche in the center flanked by a pair of lions. The cartouche on Fifth Avenue contains the inscription "ANNO D. MCMIIII", representing 1904, the year the building started construction. A simple frieze runs above the sixth floor of the 36th Street facade.

The interior was supported by Guastavino tile arches, with a steel frame inside. The fireproofing consisted of fire clay, masonry, and Portland cement.

Inside, each floor had a different function. The first floor, used as a gold and silverware showroom, had wide and shallow arches containing ornamental reliefs. Custom designs were shown on the second floor, while bronze objects and ecclesiastical and hotel merchandise were located on the third floor. Wholesale merchandise were sold on the fourth floor. The other floors were used for administrative functions, as well as for polishing, stationery, and engraving.

All content from Kiddle encyclopedia articles (including the article images and facts) can be freely used under Attribution-ShareAlike license, unless stated otherwise. Cite this article:
390 Fifth Avenue Facts for Kids. Kiddle Encyclopedia.