79th Street is a local station on the IRT Broadway–Seventh Avenue Line of the New York City Subway. Located at the intersection of 79th Street and Broadway on the Upper West Side of Manhattan, it is served by the 1 train at all times and the 2 train during late nights.

Built for the Interborough Rapid Transit Company (IRT), the 79th Street station was constructed as part of the city's first subway line, which was approved in 1900. Construction on the segment of the line that includes the 79th Street station started on August 22 of the same year. The station opened on October 27, 1904, as one of the original 28 stations of the New York City Subway. The station's platforms have been lengthened since opening.

The 79th Street station contains two side platforms and four tracks; express trains use the inner two tracks to bypass the station. The station was built with tile and mosaic decorations, although most of the original design has been replaced with a cinder block design. The platforms contain exits to 79th Street and Broadway and are not connected to each other within fare control. The remaining portion of the original station interior is a New York City designated landmark and listed on the National Register of Historic Places.

Planning for the city's first subway line dates to the Rapid Transit Act, authorized by the New York State Legislature in 1894. The subway plans were drawn up by a team of engineers led by William Barclay Parsons, chief engineer of the Rapid Transit Commission. It called for a subway line from New York City Hall in lower Manhattan to the Upper West Side, where two branches would lead north into the Bronx. A plan was formally adopted in 1897, and legal challenges were resolved near the end of 1899. The Rapid Transit Construction Company, organized by John B. McDonald and funded by August Belmont Jr., signed Contract 1 with the Rapid Transit Commission in February 1900, in which it would construct the subway and maintain a 50-year operating lease from the opening of the line. In 1901, the firm of Heins & LaFarge was hired to design the underground stations. Belmont incorporated the Interborough Rapid Transit Company (IRT) in April 1902 to operate the subway.

The 79th Street station was constructed as part of the IRT's West Side Line (now the Broadway–Seventh Avenue Line) from 60th Street to 82nd Street, for which work had begun on August 22, 1900. Work for that section had been awarded to William Bradley. The 79th Street station opened on October 27, 1904, as one of the original 28 stations of the New York City Subway from City Hall to 145th Street on the West Side Branch. The opening of the first subway line, and particularly the 79th Street station, helped contribute to the development of the Upper West Side.

After the initial system was completed in 1908, the station was served by local trains along both the West Side (now the Broadway–Seventh Avenue Line to Van Cortlandt Park–242nd Street) and East Side (now the Lenox Avenue Line). West Side local trains had their southern terminus at City Hall during rush hours and South Ferry at other times, and had their northern terminus at 242nd Street. East Side local trains ran from City Hall to Lenox Avenue (145th Street). In 1918, the Broadway–Seventh Avenue Line opened south of Times Square–42nd Street, thereby dividing the original line into an "H" system, and all local trains were sent to South Ferry.

In 1909, to address overcrowding, the New York Public Service Commission proposed lengthening platforms at stations along the original IRT subway. On January 18, 1910, a modification was made to Contracts 1 and 2 to lengthen station platforms to accommodate ten-car express and six-car local trains. In addition to $1.5 million (equivalent to $34,189,286 in 2018) spent on platform lengthening, $500,000 (equivalent to $11,396,429 in 2018) was spent on building additional entrances and exits. It was anticipated that these improvements would increase capacity by 25 percent. Platforms at local stations, such as the 79th Street station, were lengthened by between 20 to 30 feet (6.1 to 9.1 m). Both platforms were extended to the north and south.

The IRT routes were given numbered designations with the introduction of "R-type" rolling stock. The first such fleet, the R12, was put into service in 1948. The Broadway/West Side route became known as the 1 and the Lenox Avenue route as the 3. The original IRT stations north of Times Square could barely fit five- or six-car local trains depending on the configuration of the trains. Stations on the line from 50th Street to 96th Street, including this station but excluding the 91st Street station, had their platforms extended in the 1950s to accommodate ten-car trains as part of a $100 million (equivalent to $731,042,383 in 2018) rebuilding program. The platform extensions at the local stations were completed by early 1958. Once the project was completed, all 1 trains became local and all 2 and 3 trains became express, and eight-car local trains began operation. Increased and lengthened service was implemented during peak hours on the 1 train on February 6, 1959. Due to the lengthening of the platforms at 86th Street and 96th Street, the intermediate 91st Street station was closed on February 2, 1959, because it was too close to the other two stations. 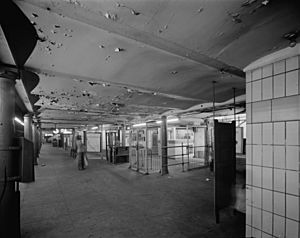 The uptown platform and control area in 1978

In April 1988, the NYCTA unveiled plans to speed up service on the Broadway–Seventh Avenue Line through the implementation of a skip-stop service: the 9 train. When skip-stop service started in 1989, it was only implemented north of 137th Street–City College on weekdays, and 79th Street was served by both the 1 and the 9. Skip-stop service ended on May 27, 2005.

In 1979, the New York City Landmarks Preservation Commission designated the space within the boundaries of the original station, excluding expansions made after 1904, as a city landmark. The station was designated along with eleven others on the original IRT. The original interiors were listed on the National Register of Historic Places in 2004.

Like other local stations, 79th Street has four tracks and two side platforms. The two express tracks are used by the 2 train during daytime hours and the 3 train at all times. The platforms were originally 200 feet (61 m) long, as at other local stations on the original IRT, but as a result of the 1958–1959 platform extension, became 520 feet (160 m) long. At this point on the line, the express tracks are slightly lower than the local tracks, particularly at the north end. 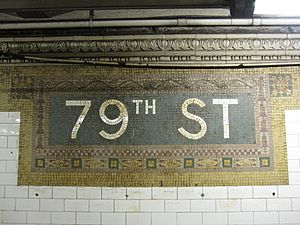 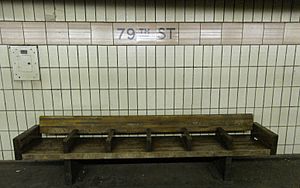 As with other stations built as part of the original IRT, the tunnel is covered by a "U"-shaped trough that contains utility pipes and wires. The bottom of this trough contains a foundation of concrete no less than 4 inches (100 mm) thick. Each platform consists of 3-inch-thick (7.6 cm) concrete slabs, beneath which are drainage basins. The original platforms contain circular, cast-iron Doric-style columns spaced every 15 feet (4.6 m), while the platform extensions contain I-beam columns. Additional columns between the tracks, spaced every 5 feet (1.5 m), support the jack-arched concrete station roofs. The ceiling height varies based on whether there are utilities in the ceiling; the areas without utilities is about 15 feet (4.6 m) above platform level. There is a 1-inch (25 mm) gap between the trough wall and the platform walls, which are made of 4-inch (100 mm)-thick brick covered over by a tiled finish.

The fare control areas are at platform level, and there is no crossover or crossunder between the platforms. The walls along the platforms near the fare control areas consist of a brick wainscoting on the lowest part of the wall, with bronze air vents along the wainscoting, and white glass tiles above. The platform walls are divided at 15-foot (4.6 m) intervals by buff and salmon tile pilasters, or vertical bands. There are tiled plaques about halfway up each pilaster, with the number "79" in white-on-green tile, and buff-and-salmon foliate designs around them. Atop each pilaster are buff faience plaques depicting two cornucopias around a shield. A cornice with egg-and-dart patterns atop bead-and-reel moldings run atop these walls. The decorative work was performed by tile contractor Alfred Boote Company and faience contractor Rookwood Pottery Company. The ceilings of the original platforms and fare control areas contain plaster molding. The section of the ceiling north of the fare control area is smooth, and the section south of fare control is composed of segmental vaults supported by the center columns.

The remainders of both platforms have cream-colored tiles and a salmon trim line with "79TH ST" written on it in black Sans Serif font at regular intervals. These tiles were installed during the late 1950s renovation. 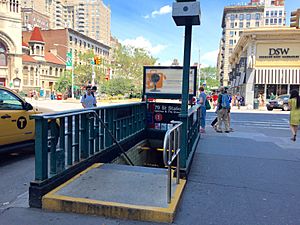 The southbound platform is fully staffed, containing a turnstile bank, token booth, staircase going up to the northwest corner of West 79th Street and Broadway, and passageway separated from the platform by a steel fence leading to a staircase that goes up to the southwest corner of the intersection. This passageway has a High Entry-Exit Turnstile to the platform, with walls made of cinder block tiles.

The northbound platform's fare control is unstaffed, containing a turnstile bank, now-closed customer assistance booth, staircase going up to the southeast corner of West 79th Street and Broadway, and passageway separated from the platform by a steel fence leading to a staircase that goes up to the northeast corner of the intersection. This passageway has a High Exit-Only Turnstile to the platform, with walls made of cinder block tiles. The street staircases on both sides contain relatively simple, modern steel railings like those seen at most New York City Subway stations.