The 82nd Airborne Division War Memorial Museum is a museum located at Ardennes and Gela Streets on the Fort Bragg Army base. Established in 1945, the museum chronicles the history of the 82nd Airborne Division from 1917 to the present including World War I, World War II, Vietnam War, and Persian Gulf Wars as well as campaigns in Grenada, Panama, Operation Golden Pheasant, Operation Restore Hope and Operation Enduring Freedom. The museum is open to the public but photo id and a vehicle search is required to enter Fort Bragg.

The museum grounds serve as a location for military ceremonies as well.

The collection includes light armor weapons, rifles, handguns, and uniforms from multiple eras including captured arms and uniforms of enemy forces including German paratrooper and Luftwaffe. Personal items including a name tag and military uniform belonging to Manuel Noriega, captured during Operation Just Cause. 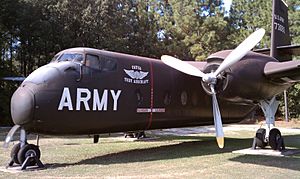 C-7 on display at the museum, once used by the Golden Knights parachute team. 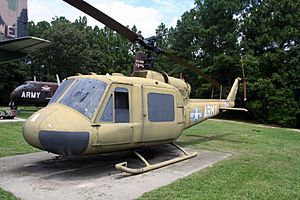 All content from Kiddle encyclopedia articles (including the article images and facts) can be freely used under Attribution-ShareAlike license, unless stated otherwise. Cite this article:
82nd Airborne Division War Memorial Museum Facts for Kids. Kiddle Encyclopedia.