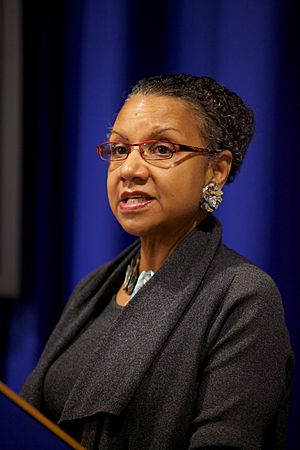 A'Lelia Bundles (born June 7, 1952) is an African-American journalist and television executive. She is also an author and Emmy Award-winning producer.

During her senior year at Harvard, Bundles began working at as a news anchor for WTLC-FM. After completing her master's degree she went to work for NBC News as a producer. Bundles was assigned to the New York, Houston and Atlanta bureaus. Bundles produced The Today Show and NBC Nightly News with Tom Brokaw. She also was a producer in Washington, DC for two of NBC's magazine programs. They were co-anchored by Connie Chung and Roger Mudd during the 1980s. In 1989 Bundles went to work at ABC News. She was the bureau chief in Washington, DC. She was the producer of ABC's World News Tonight with Peter Jennings. Bundles was also the chair of a diversity council appointed to advise ABC News president David Westin.

All content from Kiddle encyclopedia articles (including the article images and facts) can be freely used under Attribution-ShareAlike license, unless stated otherwise. Cite this article:
A’Lelia Bundles Facts for Kids. Kiddle Encyclopedia.