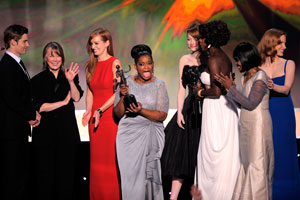 The Help cast at 18th Screen Actors Guild Awards (Spencer in the middle).

Octavia Lenora Spencer (born May 25, 1972) is an American actress, author, and producer. She is the recipient of several accolades, including an Academy Award, a British Academy Film Award, and a Golden Globe Award. She is one of two black actresses to have received three Academy Award nominations.

Spencer made her film debut in the 1996 drama A Time to Kill. Following a decade of brief roles in film and television, her breakthrough came in 2011, when she played a maid in 1960s America in The Help, for which she won several awards, including the Academy Award, Golden Globe Award, and BAFTA Award for Best Supporting Actress. For her performance in Ryan Coogler's drama Fruitvale Station (2013), she received the National Board of Review Award for Best Supporting Actress.

Spencer went on to appear in such films as Smashed (2012), Snowpiercer (2013), Get on Up (2014), The Divergent Series (2015–2016), and Gifted (2017). She received Academy Award nominations for Best Supporting Actress for playing two more women in 1960s America, the mathematician Dorothy Vaughan in the biographical drama film Hidden Figures (2016), and a cleaning woman in the romantic dark fantasy drama film The Shape of Water (2017). Her film producing credits include being executive producer on Green Book (2018).[4]

As an author, Spencer has started a children's book series, titled Randi Rhodes, Ninja Detective. She has published two books in the series, titled The Case of the Time-Capsule Bandit (2013) and The Sweetest Heist in History (2015).

Octavia Leonare Spencer (born May 25, 1970) is an American actress. She has won an Academy Award and a Golden Globe. 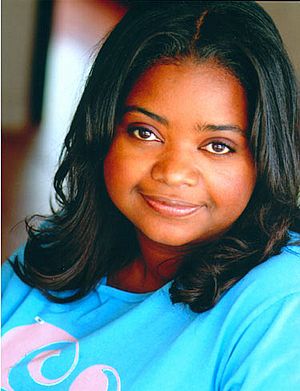 Octavia Spencer was born in Montgomery, Alabama. She has six brothers and sisters. 1988, she went to the Jefferson Davis High School and in this school she did her high school graduation.

All content from Kiddle encyclopedia articles (including the article images and facts) can be freely used under Attribution-ShareAlike license, unless stated otherwise. Cite this article:
Octavia Spencer Facts for Kids. Kiddle Encyclopedia.