ABQ Uptown is an outdoor luxury shopping mall owned by Simon Property Group in Albuquerque, New Mexico. It is one of four malls located in the Albuquerque area, and houses 51 different stores. Its anchor tenants include J.Crew, The North Face, and Lush, as well as the only Apple Store in New Mexico. The outdoor environment of this mall includes music, lights and seasonal decorations.

ABQ Uptown opened in 2006 as an open air lifestyle center, and was developed by Dekker/Perich/Sabatini, a local architecture firm that specializes in southwest and green design. 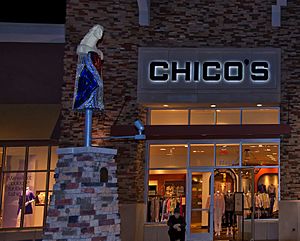 A Storefront and a statue

The brownfield site was a vacant 20 acre lot between Coronado and Winrock Malls, originally the site of St. Pius X High School. The school was razed in the late 1980s to make room for an ambitious mixed-use development called The Commons, which would have included two 22-story office towers and a 14-story hotel. However, this project fell apart and the land remained vacant. The lot was purchased and designed as a mixed-use development zone by Hunt Building Corporation, including a lifestyle center, housing, offices, and a grocery store. In November 2006, ABQ Uptown was opened, and brought more retail chains to the area, including several stores that previously did not serve Albuquerque or New Mexico, such as the state's only Apple Store. Below the infill site, a three level, 300 space parking garage was built to facilitate extra parking.

Competing Real estate owners Simon Property Group, Brookfield Properties Retail Group, and Goodman Realty Group own ABQ Uptown, Coronado Center, and Winrock Center respectively, and are making efforts to revitalize the uptown area. New growth includes the removal of the old Winrock Inn and Winrock 6 theater, and the construction of a new Theater, complete with the city's first IMAX theater. New stores and restaurants such as Dave & Busters, BJ's Restaurant, California Pizza Kitchen, Pottery Barn, and H&M are some of the first-to-market offerings that have come to Albuquerque in recent years. Other stores, such as Banana Republic, The Gap and local jeweler Mati have moved from other malls to ABQ Uptown in an effort to boost business and visibility.

Along with creating a new shopping center with popular and brand name shops, part of the areas efforts to uplift this uptown area, apartments were added across the street from the ABQ Uptown shopping center. The 198 unit building opened in 2008. These efficient apartments come with several amenities. These amenities include; Energy efficient lighting, energy efficient windows, expansive 9' to 12' ceilings, full sized washer and dryer, granite countertops, modern track lighting, personal balconies and patios, stainless steel appliances, spacious walk-in closets, stained concrete and wood style floor, and wired for technology. The apartments and the area also come with community amenities that include; a fitness center, pool and wellness center, cafe and lounge, recycling program, and wifi. The pricing and availability of these apartments are subject to change depending on the sized added amenities. There are many different sizes of apartments at the ABQ Uptown Village including number of bedrooms and type of apartments such as studios. These apartments allow pets depending on their size. These apartments are a convenient distance to the ABQ uptown shopping center.

All content from Kiddle encyclopedia articles (including the article images and facts) can be freely used under Attribution-ShareAlike license, unless stated otherwise. Cite this article:
ABQ Uptown Facts for Kids. Kiddle Encyclopedia.