Kors was born as Karl Anderson Jr. in Long Island, New York. Kors' mother is Jewish; his father was of Swedish descent. His parents are Joan Hamburger, a former model, and her first husband, Karl Anderson Sr. His mother married Bill Kors, when her son was five, and his surname was changed to Kors. His mother told Karl that he could choose a new first name as well and he renamed himself Michael David Kors. He grew up in Merrick, New York and graduated from John F. Kennedy High School in Bellmore, New York, on Long Island.

Kors married his partner, Lance Le Pere, on August 16, 2011, in Southampton, New York, in The Hamptons.

Kors' affinity for fashion started when he was very young. His mother thought his affinity might have been caused in part by his exposure to the apparel industry through her modeling career. Michael, at the age of five, even redesigned his mother's wedding dress for her second marriage. As a teen, Kors began designing clothes and selling them out of his parents' basement, which he renamed the Iron Butterfly. Kors also took acting lessons when he was young, but stopped when he was 14 when he decided to focus on becoming a fashion designer.

In 1977, he enrolled at the Fashion Institute of Technology in New York City. However, he dropped out after only nine months and took a job at a boutique called Lothar's across from Bergdorf Goodman on 57th Street in Midtown Manhattan, where he started as a salesperson and went on to become both the designer and visual display head for the store. Shortly after, Dawn Mello, the fashion director at Bergdorf's, discovered Kors. She asked if he would show his collection to Bergdorf Goodman's buyers.

In 1981, Kors launched his Michael Kors women's label at Bergdorf Goodman. In 1990, the company launched KORS Michael Kors as a licensee. A Chapter 11 filing in 1993, caused by the closure of the licensing partner for KORS Michael Kors, forced him to put the KORS line on hold. He got back on his feet by 1997 and launched a lower priced line and at the same time was named the first women's ready-to-wear designer for French house Celine. In his tenure at Celine, Kors turned the fashion house around with successful accessories and a critically acclaimed ready-to-wear line. Kors left Celine in October 2003 to concentrate on his own brand. Kors launched his menswear line in 2002. 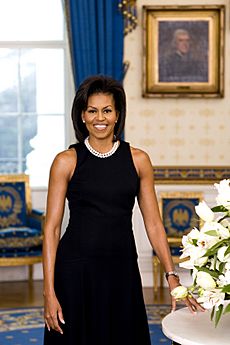 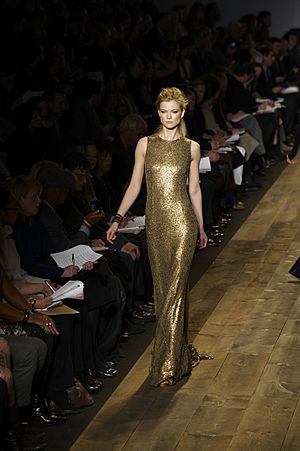 Among the celebrities who have dressed in Kors' designs are Nicole Kidman, Tiffany Haddish, Reese Witherspoon, Lupita Nyong’o, Olivia Wilde, Dakota Johnson, Blake Lively, Kate Hudson, Jennifer Lawrence, Taylor Swift, Kate Middleton, Hillary Clinton, Angelina Jolie, Jennifer Lopez, Melania Trump, Heidi Klum, and Catherine Zeta-Jones. Michelle Obama wore a black sleeveless dress from the designer for her first term official portrait as First Lady and later sported Kors again at the 2015 State of the Union address. Viola Davis wore a custom Michael Kors Collection gown when accepting a Golden Globe for best supporting actress in a motion picture for her role in Fences. Kate Hudson and Olivia Wilde both wore gowns by the designer to the 2016 Golden Globes, and Emily Blunt, nominated for her role in Into The Woods, wore a white custom gown by the designer in 2015. Joan Allen wore his gown when she was nominated for an Academy Award for Best Actress for her role in The Contender. As creative director of Celine, Kors designed many outfits for actresses to wear on screen, including Gwyneth Paltrow in Possession; and Rene Russo in The Thomas Crown Affair. One of his gowns was worn by Alicia Keys for her performance at Barack Obama's inaugural ball on January 21, 2013.

The ad campaigns for Kors often reflect the jet-set lifestyle that his fans know and love. Michael Kors Collection campaigns have most recently been shot by photographers Inez and Vinoodh, and prior to that, Mario Testino. Previous campaigns include the model Carmen Kass on a safari in Africa and relaxing on a yacht. More recent campaigns feature models Ugbad Abdi, Rianne Van Rompaey and Binx Walton living the jet-set lifestyle. The latest MICHAEL Michael Kors campaigns capture jet-setter Bella Hadid on various adventures: visiting New Orleans for her first time ever, staging a summer shoot on a deserted island and headlining the MK81 band. For Spring 2021, the campaign draws inspiration from Diana Vreeland’s famous line, “the eye has to travel,” and invites fans to change their perspective and rediscover New York City through the daydreams of Bella Hadid.

Kors was a judge on the Emmy-nominated reality television program Project Runway, which aired on Bravo for five seasons; subsequent seasons aired on Lifetime. On December 18, 2012, it was announced that Kors would be leaving Project Runway, to be replaced by fellow designer Zac Posen. Kors returned to Project Runway in 2016 as a guest judge on the season 15 finale. 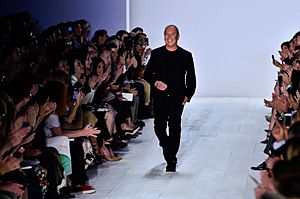 Kors at the conclusion of his Spring/Summer 2014 show at New York Fashion Week, September 2013

All content from Kiddle encyclopedia articles (including the article images and facts) can be freely used under Attribution-ShareAlike license, unless stated otherwise. Cite this article:
Michael Kors Facts for Kids. Kiddle Encyclopedia.