Bergdorf Goodman Inc. is a luxury department store based on Fifth Avenue in Midtown Manhattan, New York City. The company was founded in 1899 by Herman Bergdorf and was later owned and managed by Edwin Goodman, and later his son, Andrew Goodman.

Bergdorf Goodman is a subsidiary of Neiman Marcus, which is owned by the private equity firm Ares Management.

Neiman Marcus, which owns Bergdorf Goodman, has officially filed for Chapter 11 bankruptcy following the impact of the COVID-19 pandemic.

The company traces its origins to 1899 when Herman Bergdorf, an immigrant from Alsace, opened a tailor shop just above Union Square in downtown Manhattan.

Edwin Goodman, a 23-year-old American Jewish merchant, based in Lockport, New York, moved to New York City to work as an apprentice for Bergdorf. Within two years, Goodman had raised enough money to purchase an interest in the business, which was renamed Bergdorf Goodman in 1901. In 1906, Bergdorf Goodman moved to a new location on 32nd Street, just west of Fifth Avenue and "Ladies' Mile". While Bergdorf preferred the less expensive side street location, Goodman prevailed with the new location and bought Bergdorf's interest in the company. Bergdorf would retire to Paris.

Although Goodman had developed a good business as a ladies' tailor on 32nd Street, he decided to move uptown in 1914. Goodman constructed a five-story building at 616 Fifth Avenue, on the site of what is today Rockefeller Center. In 1914, Goodman became the first couturier to introduce ready-to-wear, making Bergdorf Goodman a destination for American and French fashion.

The store moved to its present location at Fifth Avenue and 58th Street in 1928, building its Beaux-Arts style Bergdorf Goodman Building on the site of the Cornelius Vanderbilt II House. He was unsure of the success of the new store's location, as he was uncertain whether customers would follow the store uptown. So, Goodman designed the new store so that it could be subdivided into sections with storefronts that could be rented out if needed. Early tenants included Van Cleef & Arpels, the and Dobbs the Hatter. During the Great Depression, however, Goodman thrived, buying the entire building. Throughout the 1930s, Goodman purchased the mortgages of the surrounding businesses, eventually acquiring the entire block. During this period, Bergdorf Goodman was successful enough to have merited an expansion beyond the single store. However, Goodman preferred to operate in a single location where he would be able to personally maintain the quality of the merchandise and service. 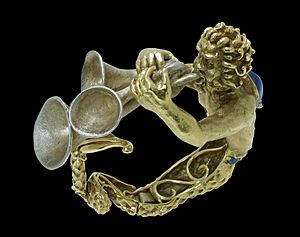 "The Neptune Bracelet," An early Alwand Vahan Design made for Bergdorf Goodman in 1969

Goodman's son, Andrew, assumed the role of president in 1951 and succeeded as head of the company in 1953, following the death of his father. Andrew was responsible for enhancing Bergdorf's reputation and expanding its range of merchandise and services.

In 1972, Andrew Goodman sold Bergdorf Goodman to Broadway-Hale Stores, which would become Carter Hawley Hale Stores (CHH) for $12.5 million ($63.7 million today). CHH had acquired Neiman Marcus, a three-unit operation at the time, in 1969. By the time of the sale, Bergdorf Goodman was the only large high-quality specialty store in the U.S. that remained independently owned. However, its decision not to build suburban branches left it with a relatively modest profit margin. Goodman remained the landlord of the store and kept a penthouse apartment on the building's top floor. 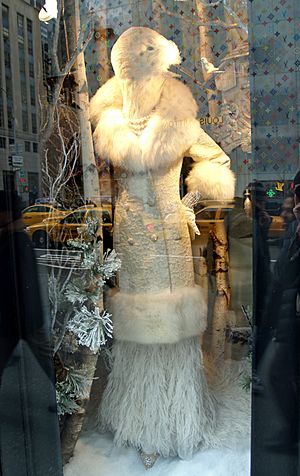 At first, CHH considered building branch locations, ultimately only constructing one location, in nearby White Plains, New York, in 1972. This location eventually became a Neiman Marcus branch in 1981. To combat its image difficulties, the company hired Dawn Mello in 1975 as vice president of fashion. She was successful in reinvigorating the conservative store and became president in 1984. She left her post in 1989 to work for the floundering Italian fashion house Gucci, though she returned to her post as president in 1994.

Bergdorf Goodman's parent company became the object of takeover bids in the 1980s. As a way to maintain its independence, Carter Hawley completed a major financial restructuring. In 1987, Bergdorf Goodman was spun-off, together with Neiman Marcus and Contempo Casuals, to form Neiman Marcus Group. The new company was headquartered in Dallas, Texas, where the significantly larger Neiman Marcus had been based for 80 years.

Chairman and CEO Ira Neimark expanded the women's store three times in the 1990s. He moved the men's store across the street to the former FAO Schwarz space at 745 Fifth Avenue in 1990. This move allowed more space for women's fashions. In 1997, the former Goodman family apartment on the building's ninth floor became the John Barrett Salon and Susan Ciminelli Day Spa. In 1999, the Beauty Level opened directly below the main floor, offering a luxury spa and Goodman's Café, serving lunch and afternoon tea.

On May 2, 2005, two private equity firms, Texas Pacific Group and Warburg Pincus, acquired the Neiman Marcus Group and its Bergdorf subsidiary, in a leveraged buyout (LBO).

All content from Kiddle encyclopedia articles (including the article images and facts) can be freely used under Attribution-ShareAlike license, unless stated otherwise. Cite this article:
Bergdorf Goodman Facts for Kids. Kiddle Encyclopedia.