The ALICO Building is a 22-story office building in downtown Waco, Texas, United States, located at the intersection of Austin and 5th Street. The building is currently owned and operated by the American-Amicable Life Insurance Company of Texas (a subsidiary of Industrial Alliance). At 282 feet tall, it is currently the tallest building in Waco. 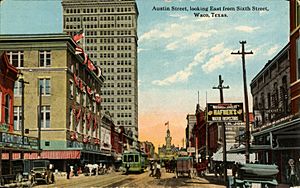 Postcard displaying downtown Waco, including the ALICO building (circa 1913)

The ALICO building was built in 1911 by the architectural firm Sanguinet & Staats for the Amicable Life Insurance Company at a cost of $755,000 ($19,730,407 adjusted to 2017 dollars), and was completed in one year. It is the second oldest skyscraper built in Texas, after the Praetorian Building in Dallas, built in the previous year.

The ALICO Building was not heavily damaged by the 1953 Waco tornado outbreak, unlike many buildings in downtown Waco. It swayed several feet when directly hit by the tornado, although the building escaped severe damage or collapse.

In 1982, the ALICO building was designated a historical landmark by the Texas Historical Commission. In 2012, it was added to the National Register of Historic Places as part of the Waco Downtown Historic District.

All content from Kiddle encyclopedia articles (including the article images and facts) can be freely used under Attribution-ShareAlike license, unless stated otherwise. Cite this article:
ALICO Building Facts for Kids. Kiddle Encyclopedia.