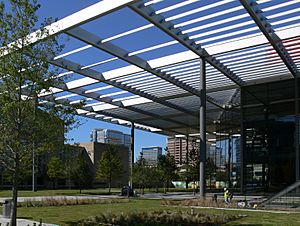 The completed Center viewed from the South. Construction on additional facilities is nearing completion.

The AT&T Performing Arts Center in Dallas, Texas, preliminarily referred to as the Dallas Center for the Performing Arts, is a $354-million multi-venue center in the Dallas Arts District for performances of opera, musical theater, classic and experimental theater, ballet and other forms of dance. It opened with a dedication by city leaders on October 12, 2009.

Three major architectural firms Foster and Partners (based in London), Office for Metropolitan Architecture (based in Rotterdam and New York City), and REX (based in New York) each designed portions of the Center.

The initial campaign began in 2000 with a goal of raising $275 million including forty gifts of $1 million. Only $18 million of the total budget for the project was publicly funded (more than 93% of funding coming from private sources).

In January 2008, total campaign funding passed the $275 million goal, and the Board of Directors voted to increase the goal to $338 million, adding a second parking garage and other improvements to the Center’s venues.

By August 2008, campaign funding surpassed $326 million—the largest capital campaign for cultural facilities in the history of Dallas and the most successful project of its kind in American history. The board increased the goal to $354 million, and as of May 2009 had raised $335 million.

The two largest gifts came earlier in the campaign: $42 million from Margot and Bill Winspear in 2002 and $20 million from Dee and Charles Wyly and Cheryl and Sam Wyly in 2004. The third largest gift was given in September 2008: a $15 million gift from Sammons Enterprises, Inc. in honor of Elaine D. and Charles A. Sammons.

On September 15, 2009, AT&T announced the naming-rights agreement for the performance facility. As part of the deal, The Center will be one of the most technologically advanced performing arts venues in the country, equipped with AT&T Wi-Fi service and complimentary Internet access to patrons. AT&T will also offer unique mobile applications to AT&T wireless subscribers.