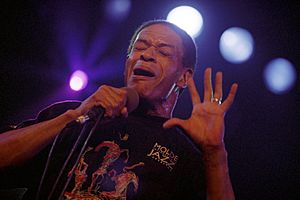 Alwin Lopez "Al" Jarreau (March 12, 1940 – February 12, 2017) was an American jazz singer. He won seven Grammy Awards and was nominated for over a dozen more. He was best known for his album Breakin' Away (1981) and singing the theme song of the late-1980s television series Moonlighting. He was also a performer in the charity song "We Are the World" (1985). He was born in Milwaukee, Wisconsin.

Jarreau had been treated for exhaustion the week before his death. He died from respiratory failure on February 12, 2017 in Los Angeles, California. He was 76.

All content from Kiddle encyclopedia articles (including the article images and facts) can be freely used under Attribution-ShareAlike license, unless stated otherwise. Cite this article:
Al Jarreau Facts for Kids. Kiddle Encyclopedia.