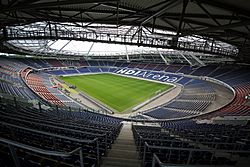 The HDI-Arena is a football stadium in Hanover, a city in north Germany. It is the home stadium of the football club Hannover 96. The HDI-Arena was built from 1952 to 1954 and called "Niedersachsenstadion" (stadium of lower Saxony) and later "AWD-Arena". Lower Saxony is a German federal state and Hanover is its capital.

Originally the Niedersachsenstadium was large enough to hold about 80.000 people. It was changed for international football championships in 1974 and 1988, especially changing standing room into seats. In 2003, it became changed to be used only for football and the name was sold to the German company of AWD. Today it can hold 49.000 people.

In 2006, the Football World Championships were played there.

All content from Kiddle encyclopedia articles (including the article images and facts) can be freely used under Attribution-ShareAlike license, unless stated otherwise. Cite this article:
AWD-Arena Facts for Kids. Kiddle Encyclopedia.