A Drop of Nelson's Blood facts for kids

"A Drop of Nelson's Blood" is a sea shanty, also known as "Roll the old chariot along" (Roud No. 3632) The origins are unclear but the title comes from the first line: A drop of Nelson's blood wouldn't do us any harm. Often described as a “walkaway” or “runaway chorus” or “stamp and go” sea chanty.The song features on the soundtrack of the 2019 film Fisherman's Friends. The chorus comes from the 19th century Salvation Army hymn, 'Roll the old chariot'. This song developed into a shanty.

The verses are things the sailors would miss while at sea for a long time with each line being repeated 3 times. The last line is always "And we won't drag on behind", although some versions say "we won't hang on behind".

Following his victory at the Battle of Trafalgar, Nelson's body was preserved in a cask of brandy, or rum, to allow transport back to England. ‘Nelson’s blood’ became a nickname for rum, but it can also mean Nelson’s spirit or bravery.

The shanty was sung to accompany certain work tasks aboard sailing ships, especially those that required a bright walking pace. 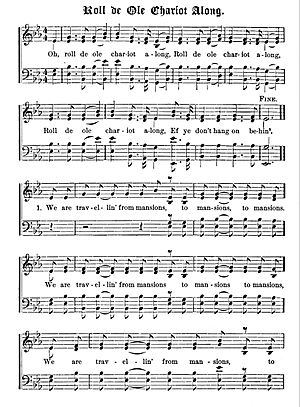 The term 'Roll the chariot' was used by religious groups in the 19th century in England. The Primitive Methodist preacher William Clowes (Primitive Methodist) mentions the phrase several times in his journals (1810 to that of 1838) describing his work spreading the word of God. In the 1880s, 'Roll the old Chariot' was used by the Salvation Army as a campaign hymn. At around the same time Gospel singers from America were touring in the UK, singing gospel songs.

‘Roll the old chariot along’

If the devil's in the way, We'll roll it over him x 3
And we'll all hang on behind.

One of the oldest known recordings, dates from the early 1920s and is held by the Library of Congress. The wax cylinder was donated by Robert Winslow Gordon

All content from Kiddle encyclopedia articles (including the article images and facts) can be freely used under Attribution-ShareAlike license, unless stated otherwise. Cite this article:
A Drop of Nelson's Blood Facts for Kids. Kiddle Encyclopedia.