Kids Encyclopedia Facts
This article is about the rural district (county). For the nearby urban district, see Aachen.

The district of Aachen (Kreis Aachen) is a Kreis (district) in the west of North Rhine-Westphalia, Germany. The city of Aachen is not part of the district. 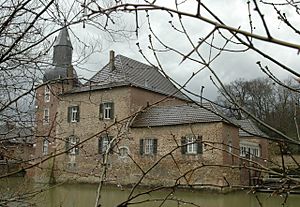 Castle of Kambach at Eschweiler

The modern district was made in 1975 by joining the old districts of Aachen and Monschau, and some parts of the districts of Düren, Jülich and Schleiden as well as the Selfkant district.

Coat of arms of Kreis Aachen

The top of the coat of arms shows the black lion, the sign of Jülich, as the district contains mostly former parts of the duchy of Jülich. In the bottom the swan on a deer antler is the sign of the city of Burtscheid, which was the capital of the district until it was incorporated into the city of Aachen.

All content from Kiddle encyclopedia articles (including the article images and facts) can be freely used under Attribution-ShareAlike license, unless stated otherwise. Cite this article:
Aachen Rural District Facts for Kids. Kiddle Encyclopedia.