In Eschweiler, there are many castles. Eschweiler is a big carnival town. There are also many sport places. These include two public swimming pools, a golf place and an artificial lake. A well-known school in Eschweiler is the Bischöfliche Liebfrauenschule with its over 100 years of tradition. 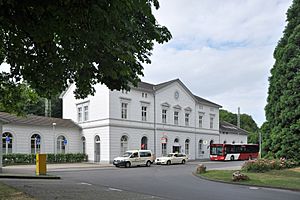 Eschweiler is on the railway line from Aachen to Cologne. The Eschweiler Central railway station was opened in 1841. Next to Eschweiler, there is a village called Bergrath. In 2010, a new shopping center with a MediaMarkt-store opened next to the motorway.

All content from Kiddle encyclopedia articles (including the article images and facts) can be freely used under Attribution-ShareAlike license, unless stated otherwise. Cite this article:
Eschweiler Facts for Kids. Kiddle Encyclopedia.