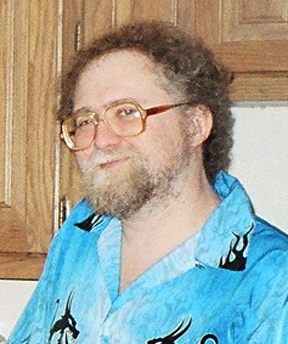 Aaron Allston (December 8, 1960 – February 27, 2014) was an American game designer and writer of many science fiction books. He was best known for his Star Wars novels. His works as a game designer include mostly role-playing games (RPGs). He several of the RPGs served to create the basis for products and following development of TSR's Dungeons & Dragons game setting Mystara. He was born in Corsicana, Texas.

Allston collapsed after having a massive heart failure on December 8, 1960 during a VisionCon in Springfield, Missouri. He died later that day at the age of 53.

All content from Kiddle encyclopedia articles (including the article images and facts) can be freely used under Attribution-ShareAlike license, unless stated otherwise. Cite this article:
Aaron Allston Facts for Kids. Kiddle Encyclopedia.