Abbotsbury Castle is an Iron Age hill fort in south west Dorset, England, situated on Wears Hill above the village of Abbotsbury, seven miles west of Dorchester and the famous hill fort at Maiden Castle.

It is situated on a high chalk hill overlooking the English Channel, and in its day was the front line of defence from invasion. The earthworks cover an area of about 10 acres (4.0 ha), of which about 4.5 acres (1.8 ha) are inside the ramparts.

The fort was occupied by the Celtic Durotriges tribe, but when the Romans invaded in AD 43, the second Augustian legion of Vespasian took the fort quickly with little struggle before moving on to Maiden Castle. There is no evidence that the Romans settled at Abbotsbury Castle as they did at some other hill forts. 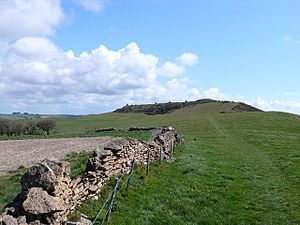 All content from Kiddle encyclopedia articles (including the article images and facts) can be freely used under Attribution-ShareAlike license, unless stated otherwise. Cite this article:
Abbotsbury Castle Facts for Kids. Kiddle Encyclopedia.