Abdelmoumene Djabou (born 31 January 1987) is an Algerian professional footballer who plays as an attacking midfielder for ES Sétif in the Algerian Ligue Professionnelle 1.

An Algerian international since 2010, Djabou was a member of the Algerian teams at the 2014 FIFA World Cup in Brazil and the 2015 Africa Cup of Nations in Equatorial Guinea. As of March 2015, he has won 12 international caps and scored 3 goals.

Djabou is Algeria's all-time top scorer at the FIFA World Cup with two goals, a record he shares with Salah Assad and Islam Slimani.

Djabou came through the junior ranks of his hometown club ES Sétif with the exception of one season with USM Sétif. He made his senior debut during the 2004–05 season, making two league appearances. The following season, he made another two appearances. He spent the 2006–07 season on loan to MC El Eulma.

On 30 September 2008, Djabou was loaned out to Swiss club FC Sion. However, after a month with the club, his paperwork had still not cleared and Djabou returned to ES Sétif.

In January 2009, Djabou was loaned out to USM El Harrach. Djabou made his début for USM El Harrach on 19 February 2009, against NA Hussein Dey coming on as a substitute in the 60th minute for Gharbi. He scored his first goal for the club against his former club MC El Eulma in the 17th minute, with the end result being 2-2. He scored his second goal against RC Kouba in the 1st minute, with the final result ending at 5-1. He appeared in 12 games and scored 2 goals during his first loan spell at USM El Harrach. He also spent the 2009-2010 season on loan with the club, scoring 5 goals in 31 appearances. On 9 June 2010, he returned to ES Sétif.

On 13 June 2012, Djabou signed a two-year contract with Tunisian side Club Africain. 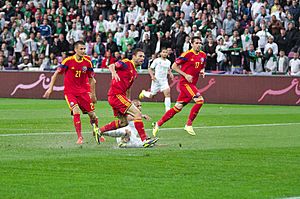 Abdelmoumene Djabou (in white) in a friendly match with Romania

On 18 September 2010, Djabou was called up to the Algerian national team by new coach Abdelhak Benchikha for a qualifier against the Central African Republic.

Djabou competed for Algeria at the 2011 African Nations Championship in Sudan, helping the Desert Foxes reach the semi-finals.

In Algeria, he is commonly known as the Algeria's Messi, mainly because skillset reminding of Lionel Messi, and his small size.

All content from Kiddle encyclopedia articles (including the article images and facts) can be freely used under Attribution-ShareAlike license, unless stated otherwise. Cite this article:
Abdelmoumene Djabou Facts for Kids. Kiddle Encyclopedia.