Al-Sallal was born in the village of Sha'asan, Sanhan district. His father died when he was at a young age. Al-Sallal joined the only orphanage in Sanaa, known as the Orphan School, which later became famous for raising many of Yemen's greatest patriots and some of the most influential politicians of that era.

Though not a member of the social elite in Yemen, Al-Sallal was widely respected by the military community as a competent and brazen officer despite being the son of a butcher, a profession looked down upon prior to the revolution. 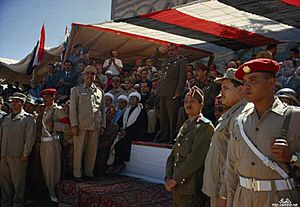 Al-Sallal led the revolutionary forces that deposed King Muhammad al-Badr and brought the Mutawakkilite Kingdom of Yemen to an end. He presided over the newly founded Yemen Arab Republic (YAR), with close ties to Gamal Abdel Nasser of Egypt which served as the YAR's strongest ally in the war against the Saudi Arabian-backed Mutawakkilite royalists that lasted into 1968. Yemen's President Abdullah al-Sallal negotiated with tribal leaders after the revolution to help cement the republic. He was later ousted in a bloodless coup led by Abdul Rahman Al-Iryani and exiled to Egypt, where he remained until President Ali Abdullah Saleh invited him to return in the early 1980s. Six different men held the position of Prime Minister under Al-Sallal, including Al-Sallal himself three times. He held both titles from the formation of the republic until 26 April 1963, when he appointed Abdul Latif Dayfallah, as well as briefly in 1965 and from 18 September 1966 until the end of his presidency. Abdul Rahman al-Eryani, al-Sallal's successor to the presidency in 1967, served as Prime Minister in 1963 and 1964. Hassan al-Amri held the post three times.

All content from Kiddle encyclopedia articles (including the article images and facts) can be freely used under Attribution-ShareAlike license, unless stated otherwise. Cite this article:
Abdullah al-Sallal Facts for Kids. Kiddle Encyclopedia.