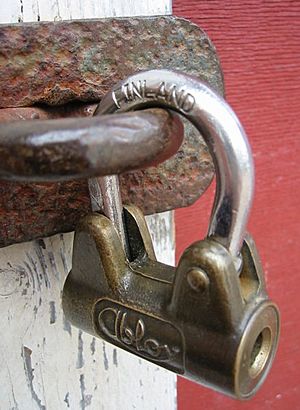 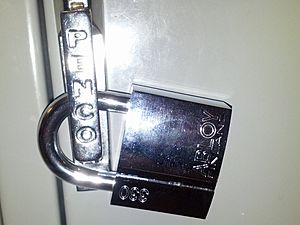 Abloy is the leading manufacturer of disc-detainer locks. The name Abloy is an abbreviation of "Ab Lukko Oy", which, roughly translated from Finnish, means "lock company". Abloy's current lock cylinder is called the Protec2, and is considered to be almost impossible to pick. It has many anti-pick features, including false gates and return bars that lock all of the discs in place if there is an attempt to manipulate them individually. There is one video of an Abloy Protec lock being decoded, but it is a cutaway lock, which means that it is possible to see inside the cylinder. Older cylinders made by Abloy include the Classic, Profile, Disklock, and Exec.

Abloy is a Finnish company which was started in 1907 by Emil Henriksson, who invented the disc-detainer lock. In 1994 Abloy was purchased by Swedish company ASSA to form the ASSA ABLOY group, which also owns Medeco, Sargent, and several other lock manufacturers. Abloy has patents on the Protec key and cylinder, making it illegal for other companies to make or copy Protec keys. Only licensed Abloy distributors and the Abloy factory can copy keys, and only at the lock owner's request. This makes it safe to lend a Protec key to a janitor, tenant, or other person without worrying that they may have copied the key. The classic key is no longer patented, but it is still difficult for someone to obtain a copy from other than an Abloy dealer because normal key cutting machines can not cut the left-to-right pattern on an Abloy key.

Abloy locks have a characteristic half-moon shape keyhole and distinct-looking keys. Abloy locks are extremely durable, and many locks dating before the World War Two are still today in everyday use. Even the classic pre-World War Two Abloy locks are considered to be extremely difficult to pick, and beyond the skills of an ordinary burglar. It can be picked, but only with a specialized tool called vempele ("Gadget" in Finnish language) and a stethoscope.

All content from Kiddle encyclopedia articles (including the article images and facts) can be freely used under Attribution-ShareAlike license, unless stated otherwise. Cite this article:
Abloy Facts for Kids. Kiddle Encyclopedia.