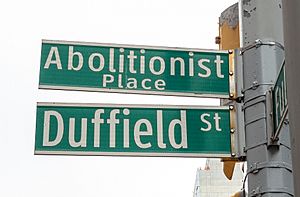 Abolitionist Place is an alternative name for a section of Duffield Street in Brooklyn, New York City, which was a significant site of abolitionist activity in the 19th century. Abolitionists Harriet and Thomas Truesdell lived at 227 Duffield Street, which is believed to have been a stop on the Underground Railroad, Underground Railroad conductor William Harned lived at the intersection with Willoughby Street, and stories have been passed down orally of involvement of several houses on the block.

In the mid-2000s the New York City Economic Development Corporation announced plans to use eminent domain to seize and demolish the sites to construct a new public square and underground parking, leading community organizing in opposition. Amid the pushback, the city renamed the street Abolitionist Place while proceeding with development plans. By 2019, all but one of the sites with claimed abolitionist activity on the street were demolished. The last, 227 Duffield, was designated as a landmark by the New York City Landmarks Preservation Commission in 2021.

Brooklyn was an active hub of abolitionism before the Civil War. Slavery was outlawed in New York in 1827, and Brooklyn's waterfront trade with southern states made it a convenient stop for escaped slaves, who would come by boat and travel along stops of the Underground Railroad like nearby Plymouth Church. Some would remain in Brooklyn and others continued north. Because of the Fugitive Slave Act of 1850, which criminalized helping an escaped slave, abolitionist activities at the time were still largely done in secret, but stories about Underground Railroad activity in houses and tunnels under Duffield Street between Fulton Street and Willoughby were passed down orally in the community. 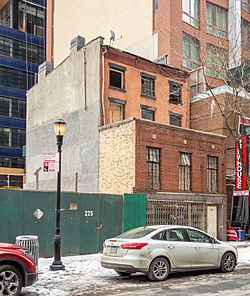 227 Duffield Street in 2021, with new construction on either side.

The three-story Greek Revival rowhouse at 227 Duffield Street was built c. 1847-50 and was home to the abolitionists Harriet and Thomas Truesdell from 1851 to 1863. During this time, it is believed to have been a stop on the Underground Railroad.

The belief is based on artifacts found in the basement, proximity to other stops like the Bridge Street African Wesleyan Methodist Episcopal Church and Plymouth Church, and a doorway and sealed arch in the basement which lead to a tunnel underneath the building. The claim has not been conclusively verified, possibly due to the secretive nature of the activity which was intentionally not well documented. In 1933, owners built an addition to the first two floors, adding a store front, while the original façade remains visible on the third floor.

Long-time owner of the house at 233 Duffield Street, Lewis Greenstein, also made claims of abolitionist activity on that site. Greenstein believes it was a "feeding station" for escaped slaves, based on stories he heard from past tenants. He also observed sealed off exits in his basement and looked into property records sufficient to argue that further study was merited. According to Greenstein, the hidden tunnels underneath what is now Abolitionist Place, including 233 Duffield, and their use by slaves seeking freedom, was "treated as common knowledge".

In 2004, the city announced a large urban renewal plan for Downtown Brooklyn, including redevelopment of the stretch for Duffield Street between Fulton Street and Willoughby Street that included 227 and 233. The plan would demolish the existing buildings to create underground parking and a large new public square called Willoughby Park. Property owners received a notice to vacate that year and began working to fight the order, building a case for historical significance, led by the owners of 227 and 233, Joy Chatel and Lewis Greenstein.

The city's Economic Development Corporation commissioned a report investigating Underground Railroad activity at the sites (as well as a building on neighboring Gold Street) in support of its development plans. The report, written by the engineering, environmental, and planning consultancy AKRF, presented evidence of tunnels between houses, contradicted a claim previously made by the city that the tunnels were for coal, found abolitionist activity at 227 Duffield, and identified several nearby venues connected to the Underground Railroad. It found that 227 Duffield was "quite possibly involved" with the Underground Railroad but emphasized in its conclusion that there was not sufficient evidence directly connecting 227 Duffield or any of the sites in the affected area to the Underground Railroad. The conclusion, which justified demolition, was criticized for its standard of evidence regarding an activity that was necessarily clandestine. The report appendix includes a peer review by twelve scholars, eight of whom expressed reservations about the conclusion, citing insufficient archaeological investigation and lack of participation of local abolitionist historians. Archaeologists and members of the Professional Archaeologists of New York City (PANYC) visited the site and described the buildings as "compelling historical documents deserving of preservation."

Controversy escalated in 2007 with the publicization of the report and the city's announcement that it would use eminent domain to seize and demolish the buildings. Community members and groups like Families United for Racial and Economic Equality (FUREE) joined Chatel in an effort to preserve the site. Chatel filed a lawsuit through South Brooklyn Legal Services to stop the seizure, which was ultimately successful. Amid the pushback against the use of eminent domain, the administration of Mayor Bloomberg allocated $2 million to panel for efforts honoring abolitionist history and granted Duffield Street an official alternative name: Abolitionist Place.

The renaming did not grant any protection, however, and by 2019, the house at 227 Duffield was the last still standing. As the building fell into disrepair, Chatel sold 50% of the property. She died in 2014, and her daughter sold the other half, which by then was heavily damaged. In June 2019 the new property owner of filed an application to demolish it in order to build a new 13-story mixed-use building in its place. The organizations Circle for Justice Innovations and FUREE, along with community activists, organized in response, pressing for landmark status, and demolition was delayed.

Protests continued into 2020, with activists using slogans and hashtags like "Black Landmarks Matter" and "#Save227Duffield". Borough president Eric Adams, mayor Bill de Blasio, Letitia James, and other politicians expressed support for the landmark designation. In January 2021, the city announced a design for Willoughby Square Park by artist Kameelah Janan Rasheed honoring Brooklyn abolitionists (CB 2 has also called for it to be renamed Abolitionist Place Park), and that anticipated the preservation of 227 Duffield Street; however the abstract nature of the design met with some community opposition and the process was delayed. In February 2021, the Landmarks Preservation Commission granted 227 Duffield Street landmark status as the Harriet and Thomas Truesdell House.

All content from Kiddle encyclopedia articles (including the article images and facts) can be freely used under Attribution-ShareAlike license, unless stated otherwise. Cite this article:
Abolitionist Place Facts for Kids. Kiddle Encyclopedia.