Absarokee ( ab-SOR-kee) is a census-designated place (CDP) in Stillwater County, Montana, United States, approximately 14 miles (23 km) south of Columbus on Highway 78. It is named after the Crow Indians who formerly inhabited the land. The population was 1,234 at the 2000 census. The Stillwater Mine, operated by the Stillwater Mining Company, is located near Absarokee.

The name Absarokee is derived from Apsáalookěi, the name given to the Crow Indian Tribe by the related Hidatsa people with Apsáa meaning "large-beaked bird" and lookěi meaning "children". Apsáalookěi thus literally means "children of the large-beaked bird". (The name "Crow" comes from the French gens du corbeaux or "people of the crows" as Apsáalookěi was translated by French fur traders in 1743.) The name was chosen by Absarokee-founder Sever T. Simonson who believed it meant "our people". It is widely believed that the difference in spelling of Absarokee from the nearby Absaroka Range is a result of the poor penmanship of an early settler whose final "a" in the name was mistaken for "ee". Though pronounced "Ab-SOR-kee" in modern parlance, Eli Ricker in one of his "Indian Interviews" from 1903-1919 ends a record of an interview with Frank S. Shively, Assistant Clerk at Crow Agency, with "Absarokee Ab-sar'-o-kee". 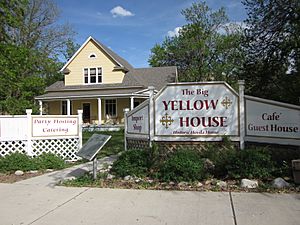 Absarokee was founded just north of the Second Crow Agency (sometimes referred to as the Absaroka Agency) in 1892. The Crow Agency was the headquarters of the Crow Tribe's reservation that was established by the Treaty of Fort Laramie (1868). That original reservation extended to more than 35 million acres with the first Crow Agency located at Fort Parker near modern Livingston, Montana in 1869. As miners encroached, the reservation was reduced to 8 million acres in 1875 with a location south of modern Absarokee established as Second Crow Agency (1875-1884). It was during this time that the Crow were forced to give up nomadic free lifestyles to one totally under the control of the US government. They were not allowed to leave the reservation, bison was replaced with US issued beef rations, and the tribe was hit by several measles and scarlet feaver epidemics. Finally, by 1884 further miner encroachment led to the creation of the third and current Crow Agency 60 miles SE of Billings on the Little Bighorn River. Most of the Absaroka Agency Fort was destroyed in a fire in 1891.

With the Homestead Acts of the 1860s and the westward expansion of the railroad, more settlers came to Montana. Not until October 15, 1892, did the federal government through a Benjamin Harrison proclamation open the land around Absarokee for settlement as part of a 1.8 million-acre land cession agreed to by Crow tribal leaders two years earlier after bowing to political pressure. Eleven days earlier on October 4, Sever Simonson and his family had arrived and established squatter's rights at the confluence of the Stillwater and East Rosebud Rivers.

Simonson and his nephew, Oliver H. Hovda, built a log hotel and together established a trading post (later the Absarokee Cooperative Trading Co.). This was followed by a saloon, livery stable, and blacksmith shop. A post office was established in 1893 in Simonson's home, where he served as Absarokee's postmaster. The two-story home of Hovda, known as the Big Yellow House, built in 1904 by an area rancher, Jacob Wagner, is located on Absarokee's main street (Woodard Ave.) and is on the National Register of Historic Sites list.

There were 499 households, out of which 34.5% had children under the age of 18 living with them, 60.3% were married couples living together, 5.8% had a female householder with no husband present, and 31.1% were non-families. 26.9% of all households were made up of individuals, and 13.6% had someone living alone who was 65 years of age or older. The average household size was 2.45 and the average family size was 3.01.

The nearby Stillwater Mine has a great effect on the population of the area. Although the population remains relatively constant with a slight increase, mining families are generally more transient than the local farming community so a slight change around town and especially at the schools is ever present.

Climate type is dominated by the winter season, a long, bitterly cold period with short, clear days, relatively little precipitation mostly in the form of snow, and low humidity.

Absarokee has two school locations. The elementary school is located on the south side of town in the former high school. Two older buildings on the campus are no longer used for educational purposes. The new high school (1989) is shared by both the junior high school and high school students.

Absarokee High School is a class C school (less than 108 students) which helps determine athletic competitions. The most notable difference in class C schools is that they play eight-man football, which is basically eleven-man football with no tackles and one split-end instead of two wide receivers.

Absarokee's sport teams are called the Huskies and the school colors are orange and black.

All content from Kiddle encyclopedia articles (including the article images and facts) can be freely used under Attribution-ShareAlike license, unless stated otherwise. Cite this article:
Absarokee, Montana Facts for Kids. Kiddle Encyclopedia.