Fragments of an Abusir papyrus 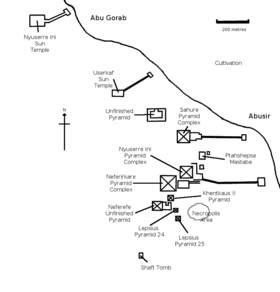 The unfinished Pyramid of Neferefre at Abusir

The Abusir Papyri are the largest find of papiri so far. They are from the Old Kingdom in ancient Egypt.

The first papyri were discovered in 1893 at Abu Gorab near Abusir in northern Egypt.

They were written about the 24th century BC during the Fifth dynasty of Egypt. They are just fragments, but they are some of the oldest surviving papyri we have. Later on many more fragments were found in the area.

The Abusir papyri tell about the running of a royal mortuary temple. There are duty rosters for priests, lists of temple equipment, lists of daily offerings to the temples at Abu Gorab, north of Abusir. Also, there are letters and permits.

The fragments bear the remains of two different writings. The introduction is written in hieroglyphs. It starts with a date referring to the reign of Djedkare Isesi. This dates the manuscripts near the end of the Fifth Dynasty.

The fragmented papyri are written in columns divided into three horizontal registers.

The text on the right summarizes allocations of grain. All writings were done in what is called the hieratic script. That is the original writing done in ink with reed pens on papyrus.

All content from Kiddle encyclopedia articles (including the article images and facts) can be freely used under Attribution-ShareAlike license, unless stated otherwise. Cite this article:
Abusir Papyri Facts for Kids. Kiddle Encyclopedia.