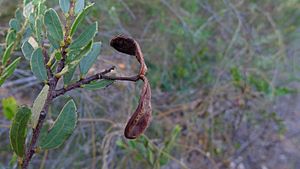 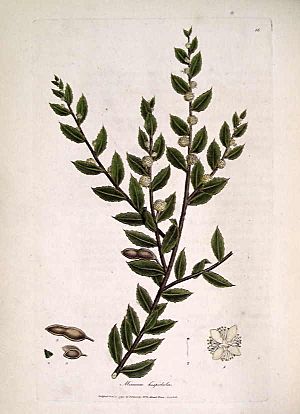 The species was first formally described by the botanist James Edward Smith in 1795 as Mimosa hispidula in the work A Specimen of the Botany of New Holland . It was then described as Acacia hispidula by Carl Ludwig Willdenow in 1806 as part of the work Species Plantarum. It was reclassified as Racosperma hispidulum by Leslie Pedley in 2003 then transferred back to genus Acacia in 2006. The shrub is mistaken for Acacia aspera which has longer and narrower phyllodes. It is closely allied with Acacia purpureopetala which is also found in Queensland. The specific epithet is derived from Latin and is in reference to the hairy nature of the branchlets and phyllode margins having short hairs or tubercles.

It has a disjunct distribution and is found around the Sydney area in New South Wales and further north from Coffs Harbour and inland to Torrington to the border with Queensland from the north as far as Crows Nest and Brisbane where it is a part of Eucalyptus woodland communities growing in shallow soils over granite and sandstone.

All content from Kiddle encyclopedia articles (including the article images and facts) can be freely used under Attribution-ShareAlike license, unless stated otherwise. Cite this article:
Acacia hispidula Facts for Kids. Kiddle Encyclopedia.