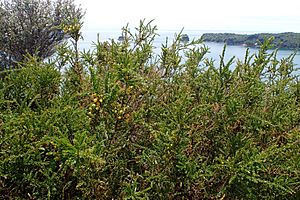 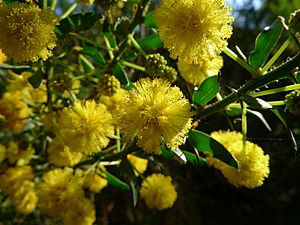 The large shrub or tree up to 2 to 4 metres (7 to 13 ft) tall and has a similar width, it has ribbed branchlets that are often arched downward. It is dense with foliage; the leaves are actually enlarged petioles known as phyllodes. They are crinkly and the new ones are covered in hairs. The erect phyllodes are asymettric and have a lanceolate shape and are around 30 millimetres (1.18 in) in length and 7 mm (0.276 in) wide. The bush is also full of long spines. It usually flowers between August and November producing an axillary flower-spike with small, bright yellow spherical flower heads and the fruits are brown pods 4 to 7 centimetres (1.6 to 2.8 in) long. The hard black seeds within have an oblong shape and are about 6 mm (0.236 in) in length and half as wide.

The spiny stipules that grow at the base of the phyllodes deter livestock from feeding on or too close to the plant.

The species was first formally described by the botanist Augustin Pyramus de Candolle in 1813 as part of the work Catalogus Plantarum Horti Botanici Monspeliensis. The species name is from the Greek words para which means near and doxa meaning glory. This probably refers the unattractive and thorny shrub being quite showy when it is in bloom.

Kangaroo thorn is widely spread across Australia, regenerating from seed after disturbances, such as bush fire. Small birds, including wrens, use this plant as shelter and dwelling, while it is relied upon as a food source for moths, butterflies and other insects, birds also feed on its seeds.

The plant has also been introduced to other continents. In the United States, kangaroo thorn is a well-known noxious weed in California.

The plant is used as an ornamental or as a dense screening plant. It make an excellent habitat and food source for birds. It grows well in full sun or in a partly shaded position. It can be planted in dry to moist well-drained areas. Seeds require pre-treatment such as scarification prior to planting.

All content from Kiddle encyclopedia articles (including the article images and facts) can be freely used under Attribution-ShareAlike license, unless stated otherwise. Cite this article:
Acacia paradoxa Facts for Kids. Kiddle Encyclopedia.