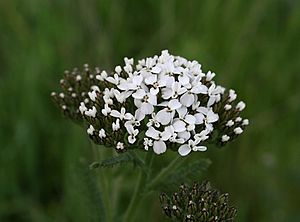 Achillea millefolium or Yarrow is a flowering plant in the family Asteraceae, native to the Northern Hemisphere.

The plant commonly flowers from May through June. It is often found in the mildly disturbed soil of grasslands and open forests. The plant has a strong, sweet scent, similar to chrysanthemums.

It has been used as a medicinal plant.

All content from Kiddle encyclopedia articles (including the article images and facts) can be freely used under Attribution-ShareAlike license, unless stated otherwise. Cite this article:
Achillea millefolium Facts for Kids. Kiddle Encyclopedia.