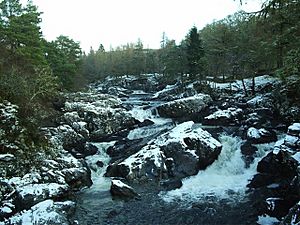 Achness Falls, also known as the Achness Waterfall or Cassley Falls, is a waterfall located on the River Cassley in Sutherland, Scotland, near Rosehall and Invercassley. Its name is derived from the Scottish Gaelic Ach-an-eas, the "field of the waterfall".

The falls descend a narrow gorge with the upper fall being a 6-metre (20 ft) drop. The lower fall is a thin broken sheet of water down about 12 metres (39 ft) of rock and when in spate this becomes a torrent which has several pools providing a means for salmon to ascend. The location is the type locality and best-studied area of the Achness Thrust, a thrust fault which dips 40 to 50° to the south at the falls. Present nearby are the ruins of a broch and a more modern chapel. By the side of the river is an old cemetery and there are woodland walks.

Atlantic salmon fishing on the River Cassley has a long history. Achness Falls is a temporary barrier to the fish each spring; they do not advance beyond it until the water warms above 10 °C (50 °F). In the late 19th century, plans to destroy the waterfall to improve the salmon run were considered.

All content from Kiddle encyclopedia articles (including the article images and facts) can be freely used under Attribution-ShareAlike license, unless stated otherwise. Cite this article:
Achness Falls Facts for Kids. Kiddle Encyclopedia.