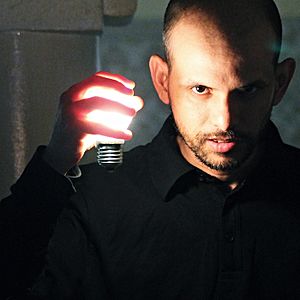 Achraf Baznani is a Moroccan artist, filmmaker and photographer. He was born in Marrakesh on 1 January 1979.

Baznani got started in photography by chance. He received a Kodak Ektra compact 250 camera for his birthday as a teen. Baznani is self-taught and has never taken photography classes. He has made ​​several short films and documentaries. These include "Walk" in 2006 and "The Forgotten" in 2007. "The Immigrant" in 2007 received several national and international awards.

Baznani is best known for being the first artist in the Arab world to publish a photo-book based on surreal imagery. Both books, Through My Lens and Inside My dreams, are surreal. Baznani places himself within his photographs of everyday objects, scenes and amusing situations.

During 2014 he completed his "52 Project ", a personnal mission which he committed on taking a picture every week in a row for a year.

On April 29th, 2015, Joel Robinson, a Canadian photographer, accused Achraf Baznani of plagiarism. His evidence was a long article, published both on his website and petapixel.com, that the Moroccan photographer used his work in a way that amounted to plagiarism.

Although Robinson did not mention Baznani by name, the nature of the case was said by Robinson to be as follows. Robinson's originals all had a photo of himself in a the middle of a graphic design of some kind. In each case, Baznani removed Robinson's image and replaced it with one of himself. That it was Baznani was published by a French source.

Achraf Baznani has won these awards: 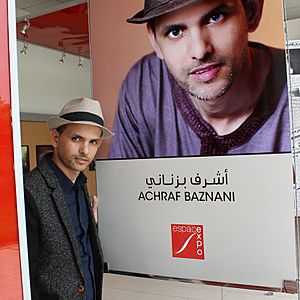 All content from Kiddle encyclopedia articles (including the article images and facts) can be freely used under Attribution-ShareAlike license, unless stated otherwise. Cite this article:
Achraf Baznani Facts for Kids. Kiddle Encyclopedia.