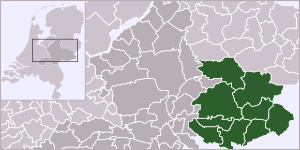 Achterhoek (English: back-corner) is a region in the province Gelderland in the Netherlands.

The area of this region today is in fact the former County of Zutphen. The backcorner of this county belonged to Münster in Germany, the former county of Lohn with places as Winterswijk, Aalten, Borculo Bredevoort, Eibergen, Geesteren, Groenlo, Hengelo, Lichtenvoorde, Neede, Silvolde, Varsseveld, Vragender, Winterswijk en Zelhem. After 1326 they conquered those areas and added it to their "Graafschap" (County) 1326, the same area nowadays known as "Achterhoek". Doetinchem, Winterswijk and Zutphen are the biggest populated areas in the Achterhoek.

In the south-west there is a small area called "Liemers". Many people think that its a part of the Achterhoek, but in fact its an other region.

All content from Kiddle encyclopedia articles (including the article images and facts) can be freely used under Attribution-ShareAlike license, unless stated otherwise. Cite this article:
Achterhoek Facts for Kids. Kiddle Encyclopedia.