Acoelorrhaphe is a genus of palms with single species Acoelorrhaphe wrightii, known as the Paurotis palm, Everglades palm or Madeira palm in English and cubas, tique, and papta in Spanish.

It is native to Central America, southeastern Mexico, the Caribbean, Colombia, the Bahamas, and extreme southern Florida where it grows in swamps and periodically flooded forests. It is a small to moderately tall palm that grows in clusters to 5–7 metres (16–23 ft), rarely 9 m (30 ft) tall, with slender stems less than 15 centimetres (5.9 in) diameter. The leaves are palmate (fan-shaped), with segments joined to each other for about half of their length, and are 1–2 m (3.3–6.6 ft) wide, light-green above, and silver underneath. The leaf petiole is 1–1.2 m (3.3–3.9 ft) long, and has orange, curved, sharp teeth along the edges. The flowers are minute, inconspicuous and greenish, with 6 stamens. The trunk is covered with fibrous matting. The fruit is pea-sized, starting orange and turning to black at maturity.

The genus name is often cited as Acoelorraphe, a spelling error to be corrected under the provisions of the ICBN. The genus name is a combination of three Greek words meaning a- 'without', koilos 'hollow', and rhaphis 'needle', an allusion to the form of the fruit. The species is named after the American botanist Charles Wright. 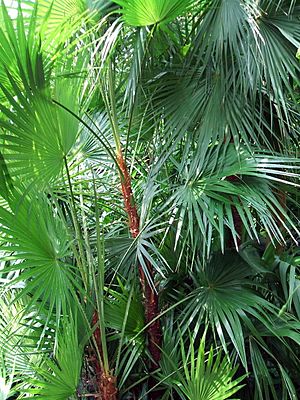 Cultivated specimen in a greenhouse at Missouri Botanical Garden

The Paurotis palm was formerly plentiful in the Florida Everglades, but many plants were taken for the nursery trade. The palm is now protected in the wild by Florida law and its numbers are increasing again. Trees propagated from seed or by sawing apart the base of a cluster are available in nurseries. It is hardy to central and southern Florida and is cultivated as a landscape palm.

All content from Kiddle encyclopedia articles (including the article images and facts) can be freely used under Attribution-ShareAlike license, unless stated otherwise. Cite this article:
Acoelorrhaphe Facts for Kids. Kiddle Encyclopedia.