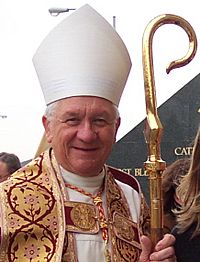 Adam Joseph Maida (born March 18, 1930) is an American cardinal prelate of the Roman Catholic Church. He was born in East Vandergrift, Pennsylvania. He was the Archbishop of the Archdiocese of Detroit, Michigan, from 1990 to 2009. He was elevated to Cardinal in 1994.

Cardinal Maida was the bishop of the Diocese of Green Bay, Wisconsin, from 1984 to 1990.

All content from Kiddle encyclopedia articles (including the article images and facts) can be freely used under Attribution-ShareAlike license, unless stated otherwise. Cite this article:
Adam Maida Facts for Kids. Kiddle Encyclopedia.