The borough was incorporated into Allegheny County in 1947.

According to the United States Census Bureau, the borough has a total area of 2.7 square miles (7.0 km2), all of it land.

West Jefferson Hills School District was ranked 50th out of 500 Pennsylvania school districts for student academic achievement, by the Pittsburgh Business Times in 2014. The ranking was based on the last three years of student academic performance on the PSSAs for: math, reading, writing and science.The PSSAs are given to all children in grades 3rd through 8th and the 11th grade in high school. Adapted examinations are given to children in the special education programs.

2012 - 49th. In 2014, the Pittsburgh Business Times also reported an Overachievers Ranking for 500 Pennsylvania school districts. West Jefferson Hills School District ranked 309th. In 2013, the District ranked 318. In 2012, the District was ranked 299th. [10] The editor describes the ranking as: "a ranking answers the question - which school districts do better than expectations based upon economics? This rank takes the Honor Roll rank and adds the percentage of students in the district eligible for free and reduced-price lunch into the formula. A district finishing high on this rank is smashing expectations, and any district above the median point is exceeding expectations." The West Jefferson Hills School District was ranked 17th out of 105 Western Pennsylvania School Districts in 2015, by the Pittsburgh Business Times. The ranking was based on the last three years of student academic performance on the PSSAs for: math, reading, writing and science. (includes 105 districts in: Allegheny County, Armstrong County, Beaver County,Butler County, Fayette County, Washington County and Westmoreland County excludes Duquesne City School District & Midland Borough School District due to no high schools)

According to traditional graduation rate calculations:

Thomas Jefferson High School serves grades nine through twelve with a current enrollment of approximately 883 students in a community of approximately 20,500 residents, comprising West Elizabeth, Jefferson Hills and Pleasant Hills Borough. There are 74 full-time faculty and staff working at the school to support a strong core academic focus with a variety of elective experiences. The building and facilities have been updated through various renovations. The most recent project was the reconstruction of the stadium. This included the field and track area as well as the stands and press box. A field house was also added at this time.Thomas Jefferson High School is well known for high academic standards and competitive athletic programs. Approximately seventy percent of graduating seniors go on to four-year college programs. Construction of a new high school building is currently underway with an anticipated opening for the 2018 – 19 school year.

Four years of study are offered in each of two languages: French and Spanish. A well-rounded program of electives is available for students in all curricular areas. Students are encouraged to carefully review course offerings available and make selections based on their post-secondary goals.

A survey completed by the senior class of 2015 yielded the following results:

Pleasant Hills Middle School is located in the Pleasant Hills Borough at 404 Old Clairton Road. The school serves students in sixth, seventh, and eighth grades. The school was constructed in 1965 and recently celebrated its 50th Anniversary. A major renovation was completed in 2004 providing an upgrade to classrooms, facilities and additional learning spaces. According to the PA Department of Education’s School Performance Profile, the school’s enrollment in 2014 was 684 students. Twenty three percent of those students receive a federal free or reduced price lunch due to family poverty. The school employs forty seven teachers. One hundred percent are “Highly Qualified”. Pleasant Hills Middle School’s School Performance Profile score in 2013-14 was 90.2 earning recognition from the PA Department of Education for exceptional performance as a Title I school. In 2015, the school was recognized as a “School to Watch” by the PA Association of Middle Level Education (PAMLE) and the National Forum to Accelerate Middle Grades Reform. Pleasant Hills Middle School is one of only thirty three schools in the state and 370 nationally to earn this recognition.

Jefferson Elementary School currently has an enrollment of approximately 550 students in grades K-5 and implements a half day Kindergarten program.

Gill Hall Elementary is one of three K-5 elementary schools in the West Jefferson Hills School District. Gill Hall was originally built in 1955 with only 8 classrooms, and was renovated in 1962, 1992, and 2002.

In 2015, Gill Hall was ranked as the 4th leading elementary school in Allegheny County.

The doors to McClellan Elementary opened on January 3, 1956, when there were only 165 students in grades 1-6. As the population continued to increase, McClellan has undergone three renovations (in 1958, 1981 and 2002). McClellan Elementary currently has a population of approximately 433 students in grades Kindergarten through fifth, with a staff of 38 educators. This includes 18 classroom teachers, 2 tutorial reading teachers, 2 special education teachers, 4 para-professionals, 2 PCAs, and 1 physical education teacher. We also share the following staff with other schools in the district: our librarian, art teacher, music teacher, an additional PE teacher, 2 instrumental lessons teachers, gifted teacher, speech therapist and social work. Mr. Justin Liberatore has been the principal since August 2011.

Thomas Jefferson High School has a long history of sports excellence. The school's football team won the state title in 1980, 2004, 2007, and 2008. The Jaguars won the Pennsylvania Interscholastic Athletic Association boys soccer championship in 2002. 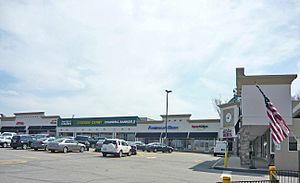 All content from Kiddle encyclopedia articles (including the article images and facts) can be freely used under Attribution-ShareAlike license, unless stated otherwise. Cite this article:
Pleasant Hills, Pennsylvania Facts for Kids. Kiddle Encyclopedia.