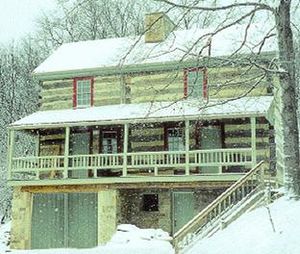 The total area of the borough of Jefferson is 16.8 square miles or 10,752 acres. Its history dates back to January 22, 1828 when it was created as a township from the old Township of Mifflin. At that time, the community was called "Jefferson Township" in honor of Thomas Jefferson.

Jefferson Hills is located along the southern border of Allegheny County and is primarily residential in nature, with approximately one-third of its area presently being used for residential purposes. The residential use is primarily single-family dwellings with slightly over one percent being multiple-family units. Another third of the borough exists in the form of open space and or vacant ground, with the balance being made up of industrial, commercial, mining, and farming land uses.

Present development has occurred almost exclusively in the flat upland areas. These developments are scattered and separated by large open tracts and or hills and valleys.

The area was the geographic base of the Peters Creek Rangers during the Revolutionary War. 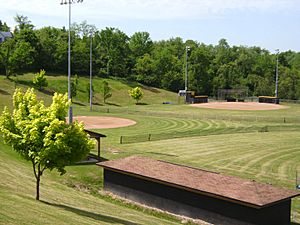 The Great Allegheny Passage is a system of biking and hiking trails spanning 150 miles (240 km). These trails run from Cumberland, Maryland to Pittsburgh. In 2006, the Great Allegheny Passage connected with the C & O Canal Trail to create a 318-mile-long (512 km) journey from Pittsburgh to Washington, D.C. This effort was coordinated by the Allegheny Trail Alliance, an organization of the seven-member trails stretching from Pennsylvania to Maryland.

The Montour Trail is a multipurpose trail extending 40 miles (60 km) from Coraopolis to Clairton. The trail is made of crushed limestone, making it ideal for biking, walking, and cross-country skiing in the winter. The Montour Trail also connects with the Panhandle Trail, a trail of 29 miles (47 km) trail between Carnegie, Pennsylvania and Weirton, West Virginia.

All content from Kiddle encyclopedia articles (including the article images and facts) can be freely used under Attribution-ShareAlike license, unless stated otherwise. Cite this article:
Jefferson Hills, Pennsylvania Facts for Kids. Kiddle Encyclopedia.