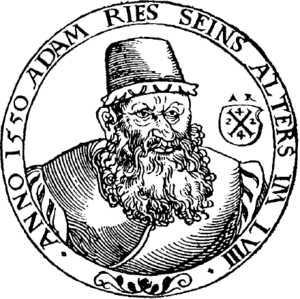 Ries became known for a work on how to calculate. His first work was about a "calculating board", which was widely used at the time. It worked rather like an abacus. Ries showed that Roman numerals were impractical for calculation. Ries wrote in German, and not in Latin, as orher mathematicians of his time.

All content from Kiddle encyclopedia articles (including the article images and facts) can be freely used under Attribution-ShareAlike license, unless stated otherwise. Cite this article:
Adam Ries Facts for Kids. Kiddle Encyclopedia.