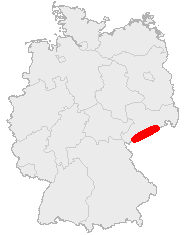 The Ore Mountains (German Erzgebirge, Czech Krušné hory) are a mountain range in Germany and the Czech Republic. They form the border between both countries for 150 km, extending from the western border of Saxony to the Elbe river. 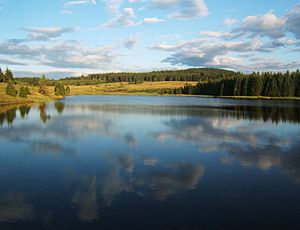 The Ore Mountains are famous for many Christmas traditions. As the ores silver and tin were not found any more in the mines, former miners had to look for new ways to feed their families. In addition to lace making and weaving, the inhabitants went into wood carving. Nutcrackers, "smoking men", "pyramids" (carousels with figures of the Christmas story or from mining) and Schwibbogen (wooden arcs with candles in the windows, symbolising the opening of a mine) are some of many Christmas goods made in the Ore Mountains. Seiffen in the East Ore Mountains was a centre of the wooden toy industry.

All content from Kiddle encyclopedia articles (including the article images and facts) can be freely used under Attribution-ShareAlike license, unless stated otherwise. Cite this article:
Erzgebirge Facts for Kids. Kiddle Encyclopedia.