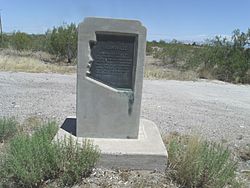 Adamsville was a populated place in Pinal County, Arizona. Once a thriving farm town, it became a ghost town by the 1920s. Adamsville is located at an elevation is 1,450 feet, on the south bank of the Gila River, west of Florence, Arizona.

Adamsville was one of the first two towns formed in Pinal County, Arizona. It was named for its original settler in 1866, Charles S. Adams. When a post office was established there in 1871, it was named Sanford, (for a Captain George B. Sanford of the First U.S. Cavalry), by a political enemy of Mr. Adams, Richard McCormick. Local residents continued to use the original name, causing confusion which existed until 1876, when the post office was discontinued. The entire settlement was gone by 1920.

All content from Kiddle encyclopedia articles (including the article images and facts) can be freely used under Attribution-ShareAlike license, unless stated otherwise. Cite this article:
Adamsville, Arizona Facts for Kids. Kiddle Encyclopedia.