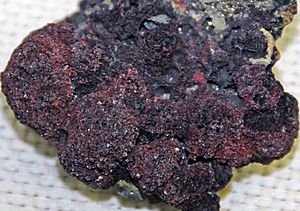 Cinnabar ore specimen from the old Klau Mine

Adelaida is an unincorporated community in San Luis Obispo County, California, United States. Adelaida is 10 miles (16 km) west of Paso Robles. The community had a post office from 1877 to 1936.

Adelaida is locally pronounced without the terminal "a." 19th century documents commonly spell the place name as "Adelaide".

In the 1880s, the population of Adelaida was approximately 500, supported by the prospering Klau and Buena Vista mercury mines. The town boasted a community center, saloon, dance hall, general store, and four schools. The population increased further in 1898 with an influx of Mennonite settlers. The Adelaida School, located near the entrance to the Osgood Ranch on Chimney Rock Road, was built in 1917. It is being restored by the Adelaida Historical Foundation. This school and the Klau Mine Road cemetery are all that is left of old Adelaida. Although the quicksilver mines were in operation into the 1970s, most of the local businesses had long since relocated to Paso Robles.

All content from Kiddle encyclopedia articles (including the article images and facts) can be freely used under Attribution-ShareAlike license, unless stated otherwise. Cite this article:
Adelaida, California Facts for Kids. Kiddle Encyclopedia.