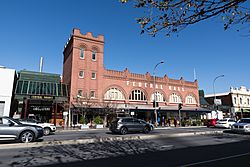 The restored facade of the Adelaide Central Market.

Establishment of the Market 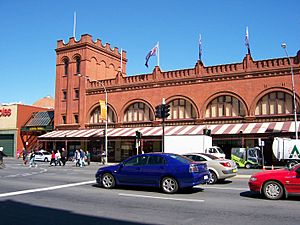 The Market began in Grote Street in 1869 and was known as the City Markets, with its official opening by Mayor Judah Solomon on 23 January 1870. In 1869, land was bought in the present day location of the markets for £2600 for three town acres. However, the main markets at that time was the East End Markets that existed between Rundle Street and North Terrace. This market would equal the Adelaide Central Market until 1988.

Because of the overflow of the East End Markets, some traders moved to the Central Market. The structure of the building was constructed of wood and iron sheets and completed in June 1869. At its commencement, it opened on Tuesdays and Saturdays with 50 to 100 produce carts. Shops were built along the perimeter of the markets and facing the streets. In the early 1880s, fish supplies were scarce in Adelaide and had to be brought from Port Augusta and Port Pirie by rail. 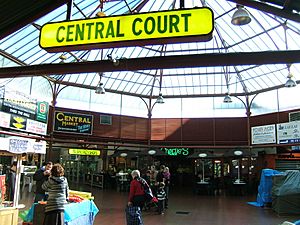 On 8 February 1900, a foundation stone was laid by Mayoress Rosa Ware, in the presence of the Mayor of Adelaide, Arthur Ware. Shops were added as well as a refrigeration plant for fruit and fish. Electricity was added in 1902 to replace the gas lighting. Arcade shops were added in 1915 on the eastern side. At that stage, amusements were provided such as darts, billatelle shooting galleries, ball bowling, hoop-la and cheap jacks. The addition of other businesses, such as the Hampshire Hotel in 1911, the Moore's Department stores in 1914 and Her Majesty's Theatre also attracted customers. The Market opened for trading on Tuesday, commencing April 1920.

Redevelopment of the Market commenced on 18 January 1965 with the demolition of the east end facade of market in Grote Street and addition of a car park. The new market was opened on 17 June 1966 by Lord Mayor James Irwin. Prior to August 1965, the Market was known as the "City Market", and after that, it was known as the "Central Market" being officially opened on 16 August 1965 with this official name.

Addition of a Supermarket and Fire

Coles Supermarkets joined the neighbouring Central Market Arcade in the Central Market precinct in June 1967. Further undercover car parking was developed as well as the addition of a shopping complex. On 22 June 1977, the Market's southern stall area was badly damaged in a fire. Major restoration was undertaken to repair the damage caused by the fire. There was also at this time, competition from local suburban shopping centres.

Further restoration was completed in 1987 and was opened by Lord Mayor James Jarvis on 14 April 1987.

The Market currently has 76 stalls in some 8,000 square metres and some 1000 car park spaces exist above the Market Precinct.

Originally known as Victoria Square Arcade, the Central Market Arcade is located to the immediate east of the Central Market. The current arcade was constructed following the redevelopment of the market proper and was opened by then Premier David Tonkin on 3 November 1982; it houses over 60 specialty shops. Privately-owned from its construction, the City of Adelaide assumed ownership of the arcade in September 2018 when the building's ground lease expired and began plans to completely redevelop the site into a new arcade topped with a mixed-use tower.

Located on the western side of the Central Market and linking it with Chinatown, the Market Plaza houses a number of specialty shops, cafes and a food court. The Market Plaza was opened by Lord Mayor James Jarvis on 3 December 1985. The Market Plaza is independently owned and managed.

The main street of Adelaide's CBD and is well known for its abundance of multicultural cuisine and dining establishments.

All content from Kiddle encyclopedia articles (including the article images and facts) can be freely used under Attribution-ShareAlike license, unless stated otherwise. Cite this article:
Adelaide Central Market Facts for Kids. Kiddle Encyclopedia.