Adi Granov () is a Bosnian-American comic book artist and conceptual designer. He is best known for his painted work with Marvel Comics, for whom most of his comics work is produced, in particular his work on Iron Man. He is especially known for illustrating the miniseries Iron Man: Extremis, and for doing concept and keyframe artwork for the 2008 film Iron Man, a job for which director Jon Favreau personally selected him. Granov has also done concept work for the films The Avengers and The Amazing Spider-Man 2, has designed packaging for the DVDs and toys based on those properties, and has also done design work for video games.

Adi Granov was born in 1977 in Sarajevo, Socialist Republic of Bosnia and Herzegovina, Yugoslavia. He began drawing at an early age, though he did consider pursuing it as a career until he was sixteen. In 1994, 16-year-old Granov fled Bosnia with his mother and his sister, four years his junior, to escape the Bosnian War. They immigrated to the United States, where Granov spent the next ten years living in Portland, Oregon and Seattle, Washington, where Granov studied art and concept design at a university. He was influenced mostly by European comics and American poster artists, as well as some few manga artists. He has cited Moebius, Sergio Toppi, Tanino Liberatore, Katsuhiro Otomo, Syd Mead, Richard Amsel, and specifically the airbrush technique of Drew Struzan and Hajime Sorayama, though he stated in a 2010 interview that he considers himself "a drawer not a painter."

Granov spent his last three years in the U.S. in Chicago doing design work for Nintendo Software Technology, working on Bionic Commando and Wave Race: Blue Storm, among other titles. He provided illustrations for Wizards of the Coast on their Star Wars and Wheel of Time games, and illustrated "Masters of Destiny", a short story for Metal Hurlant #10, an anthology magazine by Humanoids Publishing. While in Chicago he obtained his first illustration work for a Dreamwave Productions, a comics publisher based in Toronto, Ontario, Canada. Though his work on their book, NecroWar (2003), was well-received, the publisher filed for bankruptcy, at which point Granov had not been paid for several months, impinging upon his ability to pay his rent. 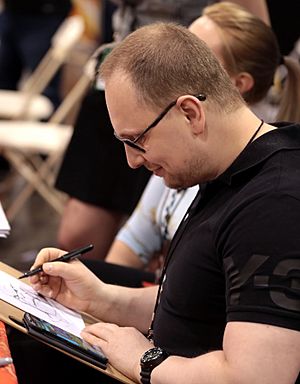 Granov at the 2018 Phoenix Comic Fest

In a 2014 interview, he stated that he had been working as an illustrator and a concept artist for many years prior when he showed a portfolio of comics artwork to a company at the San Diego Comic-Con. As Granov put it, "one thing led to another," until he received an unsolicited email from an editor at Marvel Comics, expressing a positive view of his artwork, and inviting to work for Marvel. Granov accepted, and his first job for them was interior and the cover artwork for the 2004 Iron Man Poster Book. His work was a success, and as a result, Granov was teamed with writer/novelist Warren Ellis for the 2005–06, six-issue miniseries Iron Man: Extremis. Though the character at that point was considered an unpopular, third tier character, Extremis is considered one of the best Iron Man comics ever produced, revitalizing interest in the character, and gaining the attention of film director Jon Favreau, who hired Granov one of the three key design and concept artists on the 2008 film Iron Man. The "Extremis" storyline would subsequently be adapted into the 2013 film Iron Man 3. In 2004 Marvel Editor-in-Chief Joe Quesada named Granov as one of the Young Guns, a group of artists who have the qualities to make "a future superstar penciler".

In May 2008, the Iron Man feature film was released, for which Granov helped design the Iron Man and Iron Monger suits, and did key-frame illustrations that indicated how the designs would behave while in motion. Granov also directed the building of 3D models at Stan Winston Studios, working alongside the production's two other key designers, Phil Saunders and Ryan Meinerding. That same month, Marvel debuted Iron Man: Viva Las Vegas, a two-issue miniseries written by director Jon Favreau, and illustrated by Granov, which pit the armored Avenger against Fin Fang Foom.

Granov would later do concept work on the 2012 film The Avengers, and on the 2014 film The Amazing Spider-Man 2. He has also provided artwork for the packaging of action figures and other toys based on those characters.

Granov provided the illustrations for the packaging of the band Tool's 21st anniversary re-release of their debut album, Opiate. He has worked on packaging illustration, design and consulting for high-end toy company Play Imaginative for their line of collectible Iron Man figures.

When Granov started posting his work on an Internet art forum, he became friends with that site's moderator, an Ilkley, West Yorkshire native named Tamsin Isles. They eventually met and married, and made their home in Ilkey. Granov says of the town, "Ilkley was the first place I saw in England. I had always lived in cities, Sarajevo, Portland, Seattle, Los Angeles for a few months, Chicago... but to see the moors and the countryside and the beautiful town..." Tamsin arranges his convention appearances, handles sales of his art, and also helped organize Thought Bubble, a comics convention based in Leeds.

Granov is fond of mechanical devices such as airplanes, trains, cars, watches, etc. His hobbies include beekeeping and rebuilding his 1967 Lotus Elan. He is also an ardent fan of science fiction.

All content from Kiddle encyclopedia articles (including the article images and facts) can be freely used under Attribution-ShareAlike license, unless stated otherwise. Cite this article:
Adi Granov Facts for Kids. Kiddle Encyclopedia.