Meyer was born in to a Jewish family of German descent in Natchez, Mississippi.

During the Civil War, Meyer served in the Confederate Army on the staff of Brigadier General John Stuart Williams of Kentucky and attained the rank of assistant adjutant general. A planter in Mississippi and a banker in New Orleans, he served in the Louisiana National Guard, attaining the rank of brigadier general in 1881. 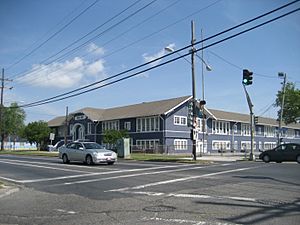 The Adolph Meyer School (1917) was a school in Algiers on General Meyer Avenue; renamed to honor Harriet Tubman in the 1990s, the facility operates today as Harriet Tubman Charter School, one of Crescent City Schools' three charter elementary schools. In 2016, the building was listed on the National Register of Historic Places. It is located at the southeast corner of General Meyer and Behrman, across from the U.S. Naval Station Algiers Historic District and the city's Federal City complex.

All content from Kiddle encyclopedia articles (including the article images and facts) can be freely used under Attribution-ShareAlike license, unless stated otherwise. Cite this article:
Adolph Meyer Facts for Kids. Kiddle Encyclopedia.