Jean Baptiste le Moyne, Sieur de Bienville, was granted a large tract of land on the west bank of the river opposite New Orleans in 1719. This date is sometimes given as the year of the town's founding, making it one of the oldest neighborhoods in what is now New Orleans, but development as a town as opposed to a private plantation did not actually occur until about 1800. The name is believed to have come from the proximity to the city as compared to France and Algeria. Another theory is that a soldier returning from fighting in Algeria decided it looked just like that country when viewed from a ship. 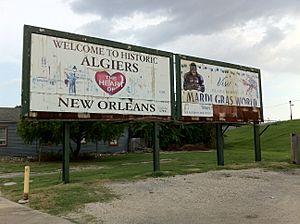 Others claim some connection to Arabs or Egypt and Algeria and Tunisia in the far past for the area. Some Arab groups were and are related not only to North Africa and Moors, but also to Asia as well as India. Columbus reported flags on ships of other powers on some of his travels to the Americas. Towns in the South named Egypt or Little Egypt or Tunica are real. It is possible, even likely, that some of this tradition is real.

A powder magazine was built here for safety reasons and because it stood on higher ground. A slaughterhouse was also established and Algiers went by the name of Slaughterhouse Point for some time.

With the importation of African slaves in the 18th century, this area was used as a holding area until those who survived the sea voyage recovered enough to be dispatched across the river to be sold. Algiers was also a holding area for the Cajuns who survived the Great Upheaval, when the British expelled them from Nova Scotia. The oldest part of Algiers is Algiers Point, across the river from the French Quarter. 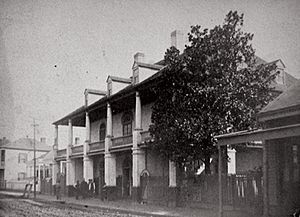 The Duverjes built their plantation home in Algiers in about 1812. They would become the first family of Algiers and their home would later become the Algiers Courthouse. Algiers Point has been connected with the foot of Canal Street in downtown New Orleans by the Canal Street Ferry since 1827. It is one the oldest continuously operated ferry services in North America. Part of the Battle of New Orleans, in January 1815, was fought on the West Bank in what is now Algiers. Original earthworks remain, marked with a historical marker on General Meyer Avenue in the Aurora neighborhood. Much land in Algiers and elsewhere in south Louisiana was owned by John McDonogh, who was one of the world's largest private land owners until his death in 1850. His estate was willed to public schools in Baltimore and New Orleans.

McDonogh's home was located on the river south of Algiers point, but the land has since been washed away. McDonogh's grave is in the McDonogh Cemetery in Gretna. Algiers was incorporated as a city in 1840. Shipbuilding was an important industry here.

In the 1850s, Algiers became a major railroad center and eastern terminus of the New Orleans, Opelousas and Great Western Railroad. Ferries were utilized for nearly a century to carry passengers, freight, and rail cars across the Mississippi River between the West Bank (including Algiers) and the East Bank (Central Business District of New Orleans). Later, the railroad yard at Algiers would be the eastern repair shop for the Southern Pacific Railroad. The SPRR shop employed 4000 and had the capability to build mechanical parts for steamships. 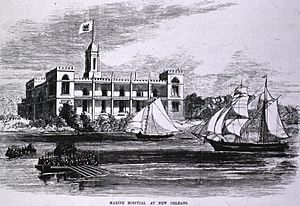 In April 1862, during the American Civil War, flames arose from the shipyards in Algiers as Confederate officials destroyed property that might benefit the invading Union troops. Historian John D. Winters, in his The Civil War in Louisiana (1963), notes that the New Orleans populace was "'amazed and could scarcely realize the awful fact, and ran hither and thither in speechless astonishment.' . . . Shocked out of their dumb disbelief, many people joined in the destruction. Cotton was rolled from the warehouses, ships loaded with produce were boarded, and fire was set to the lot. Crowds of the city poor broke open warehouses and carried away baskets, bags, and carts spilling over with rice, bacon, sugar, molasses, corn, and other foods. What they could not carry away they attempted to destroy by dumping in the river, burning, or throwing into the open gutters. A mob broke into the powder and gun factories in the Marine Hospital and carried away rifles and ammunition. The city was a frenzy of disorganized activity."

In 1870, Algiers was annexed to the city as the 15th Ward, an arrangement which has remained although there have been repeated discussions of secession. Until the latter 1930s, rail yards housed large amounts of freight and rolling stock, which was brought back and forth across the Mississippi River by barge. Then, the Huey P. Long Bridge, which included a railway bridge, was built upriver at Bridge City, Louisiana. The largest railroad presence had been the Southern Pacific yard. That location is still known to Algerines as "the SP yard." For decades it was largely a vacant strip. Portions of the tract were redeveloped for housing in the early 21st century. In the yard's active days, a steam-powered Southern Pacific train ferry brought railroad cars from there across the Mississippi River. The Algiers rail yards were known for their ability to repair or create replacements for any part needed for any type of locomotive and mechanical parts for ships. 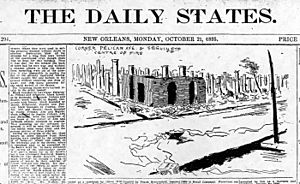 A fire destroyed most of the buildings in Algiers in 1895. Most of the gingerbread-fronted houses seen in the neighborhood today date from the rebuilding that began almost immediately after that fire; although a small number of older buildings still survived. In the early decades of the twentieth century, Algiers was the home of Martin Behrman, the longest-serving mayor of New Orleans. In 1901, the U.S. Navy established a naval station in Algiers. From 1966 until 2009, the site was one of the two campuses of the Naval Support Activity New Orleans base. Now the shuttered facility's West Bank campus is being redeveloped as a federal city. For centuries, intensive settlement in Algiers extended little beyond Algiers Point. The completion of the Greater New Orleans bridge across the Mississippi River in 1958 (now the Crescent City Connection) and the construction of Victory Drive (now General DeGaulle) and General Meyer Avenue made significant new development possible, and Algiers grew rapidly for the next 25 years. 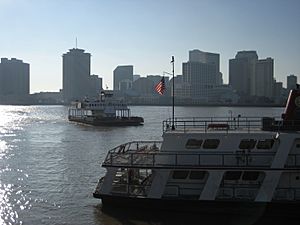 Algiers suffers from a high poverty rates: Between 14.3 percent and 40 percent in most census blocks, according to the most recent federal data collected between 2007 and 2011 and assessed by The Data Center, an organization that researches community demographics in Southeast Louisiana. The 70114 section of Algiers is among the lowest income neighborhoods in America, below 91.3% of U.S. neighborhoods. With 54.4% of the children here below the federal poverty line, it also has a higher rate of childhood poverty than 92.5% of U.S. neighborhoods. While the 70131 zip code in Algiers contains affluent subdivisions such as English Turn, Woodland Heights, Packenham Oaks, Lakewoood, and Park Timbers.

A number of New Orleans carnival krewes have their "dens" (warehouses where their floats are constructed and stored) in Algiers. Algiers Point was placed on the National Register of Historic Places in 1978 and designated a local historic district in 1994. People from Algiers have traditionally been known as "Algerines". Noted Algerines have included jazz musicians Jimmy Palao, Red Allen and Emmett Hardy, and R&B singer Clarence "Frogman" Henry. Political figures from Algiers include State Representative Jeff Arnold and State Senators Francis C. Heitmeier (1988-2008) and his brother, David Heitmeier (since 2008).

Algiers is home to many churches. There are numerous Catholic and Baptist congregations. The oldest Lutheran congregation, Trinity Evangelical Lutheran Church, was founded in 1875. Trinity's steeple was blown off by Hurricane Katrina in 2005. A Catholic congregation, as well as Methodist and Episcopalian congregations, are all on the Historic Register of New Orleans, and some Algiers churches are listed on the National Historic Landmark lists. There are two branches of the New Orleans Public Library located in Algiers. The Cita Dennis Hubbell Branch was built in 1907 as the Pelican Avenue Branch, one of three Carnegie libraries in New Orleans. Following years of neglect and hurricane damage, the library's roof was found to be in imminent danger of collapse and the location was closed on May 2008. The Hubbell Branch was temporarily located at the Algiers Courthouse Carriage House a few blocks away, until it re-opened in the summer of 2013 in the original Pelican Avenue location. The Algiers Regional Branch, two miles away, was a larger library built in 1966. This library was damaged extensively by Katrina. The building was demolished and a new library constructed, which opened in early 2013.

The area upriver from the Point was historically known as McDonoghville (which extended into part of what is now Gretna). Downriver from the Point is the West Bank portion of Naval Support Activity New Orleans, the largest military installation in the Greater New Orleans area. Further downriver from this is the neighborhood of Aurora, lower Algiers (Cutoff, River Park) and further still, the English Turn area, which was not substantially developed until the late 20th century. On September 26, 2005, Algiers became the first major section of New Orleans to be reopened to residents after Hurricane Katrina. Although a number of buildings suffered wind damage from the storm, Algiers escaped the flooding which affected most of the East Bank.

The Krewe of NOMTOC (New Orleans Most Talked Of Club) began parading on the Westbank (Orleans Parish) in 1970. Their inaugural parade had six floats, six bands, six marching units, one horse group and a motorcycle squardron. Today, this all-black krewe is composed of 400 male and female riders, 26 floats, ten bands and a number of marching and riding groups. Throws include ceramic medallion beads, jug banks and their signature Jug Man dolls. Their most popular throws for the 2013 parade include: Medallion Tri-Color Bead, Stuffed Baseball, Lighted Medallion Bead, Velour Spear with Krewe Crest, Top Hat Bead with Gold Pearls. The Krewe suggests that the best spots for family viewing are Holiday Dr. and Gen. Meyer Ave. in front of Behrman Stadium or along Mardi Gras Blvd. or at the intersection of Nunez St. and Mardi Gras Blvd. The Krewe’s sponsor, The Jugs Social Club has a rich heritage of civic activism, regularly donating funds to local schools, youth groups, and social programs. Each year a group of academic honor students is selected as guest riders in the parade.

Algiers contains many neighborhoods such as

Algiers is zoned to schools in the Orleans Parish School Board (OPSB), also known as New Orleans Public Schools (NOPS). The district has its headquarters in the Westbank area of Algiers.

One campus of the International School of Louisiana (ISL) is in Algiers.

All content from Kiddle encyclopedia articles (including the article images and facts) can be freely used under Attribution-ShareAlike license, unless stated otherwise. Cite this article:
Algiers, New Orleans Facts for Kids. Kiddle Encyclopedia.