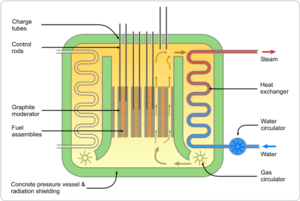 Diagram of an Advanced gas-cooled reactor

The Advanced Gas-cooled Reactor (AGR) is a type of nuclear reactor used in the United Kingdom. These are the second generation of British gas-cooled reactors. They use graphite as the neutron moderator and carbon dioxide as the coolant. They have been the backbone of the UK's nuclear generation fleet since the 1980s.

All content from Kiddle encyclopedia articles (including the article images and facts) can be freely used under Attribution-ShareAlike license, unless stated otherwise. Cite this article:
Advanced gas-cooled reactor Facts for Kids. Kiddle Encyclopedia.