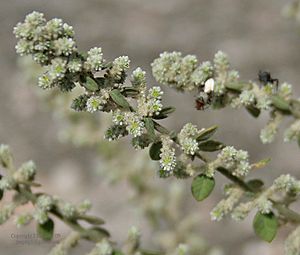 Aerva lanata is a common weed which grows wild everywhere in the plains of India. The root has a camphor-like aroma. The dried flowers which look like soft spikes, are sold under the commercial names Buikallan and Boor. It is one of the plants included in Dasapushpam, the ten sacred flowers of Kerala. 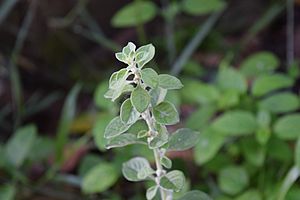 Mountain knotgrass is an annual with a branching, somewhat woody root system. The stems are mostly straggling and sprawling and spread widely, sometimes as much as 6 feet (1.8 m) in length. The often stalkless leaves are alternate, oval and 0.5 to 1.5 in (13 to 38 mm) long. They grow from whitish papery stipules with two lobes and red bases. The tiny clusters of two or three flowers grow in the leaf axils. The flowers are about 0.1 in (2.5 mm) long, pink, green or dull white. The flowers are normally self-pollinated. Flowering time is from May to October. 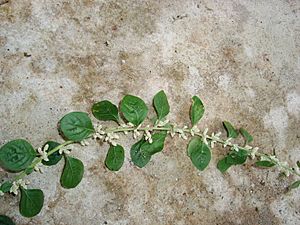 Aerva lanata is native to tropical Africa, South Africa, Madagascar, Saudi Arabia and tropical Asia. The species prefers damper sites than Aerva javanica and can be found in open forests on mountain slopes, on waste and disturbed ground, deserted cultivation and coastal scrub and at altitudes from sea level to 900 m (3,000 ft). It is a common weed in arable fields and bare patches of ground.

This plant is used for food for people and animals. The whole plant, especially the leaves, is edible. The leaves are put into soup or eaten as a spinach or as a vegetable. The plant provides grazing for stock, game and chickens. The plant is used as a traditional medicine for snakebites.

In the traditional medicine of India, the juice of crushed Aerva lanata root is used for jaundice therapy.

All content from Kiddle encyclopedia articles (including the article images and facts) can be freely used under Attribution-ShareAlike license, unless stated otherwise. Cite this article:
Aerva lanata Facts for Kids. Kiddle Encyclopedia.