The Africa Centre, London was founded in 1964 at 38 King Street, Covent Garden, where over the years it held many art exhibitions, conferences, lectures, and a variety of cultural events, as well as housing a gallery, meeting halls, restaurant, bar and bookshop. The Africa Centre closed its original venue in 2013, and now has a permanent home at 66 Great Suffolk Street, Southwark. It is a registered charity.

The Africa Centre was opened in 1964 by Kenneth Kaunda at the Grade II listed 38 King Street. The building, which had once been a banana warehouse in the 18th century and subsequently an auction house, had been "given by the Catholic Church in perpetuity to the people of Africa in 1962". 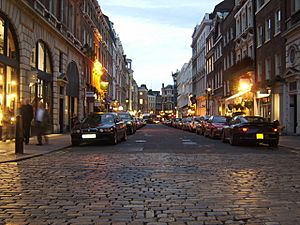 The idea for the centre was conceived in 1961 by Margaret Feeny, whose aim (as described by Lloyd Bradley) was "to foster non-governmental relations between newly independent African nations by bringing people together on neutral apolitical ground. It would also maintain informal cultural links between Britain and her former colonies, while offering a friendly meeting place for Africans living in London."

Archbishop Desmond Tutu used to meet Thabo Mbeki at the bar, and described it as a home "to all who are Africans, and all those who have a care for the interests of the continent and its people". In the words of Richard Dowden, "it became The Place for African presidents, freedom fighters, writers and artists to speak and debate. You could find everything African there, from Ghanaian food to fierce debates and fantastic parties. Sometimes all three at the same time on a Saturday night; a High Life or Congolese band playing to a crammed floor of dancers while below in the basement radicals and reactionaries sipped pepper soup and argued about evolutionary versus revolutionary change. During the week there were talks about art, African dance lessons, films and plays." The Association for the Teaching of African and Caribbean Literature (ATCAL) was among the influential organisations that used the Africa Centre's facilities, holding its inaugural conference ("How to teach Caribbean and African literature in schools") there in 1979.

In 2005, the London Art and Artists Guide described it as a "very lively arts centre", that held classes in dance, movement, and literature, and hosted meetings in the evenings; and the Calabash Restaurant was considered "well worth a visit". The bookshop sold books published only in Africa, as well as "excellent handicrafts and sculpture".

In August 2012, the building at 38 King Street was sold to the property developer Capital & Counties for an estimated £12 million. There was a concerted campaign to save the Centre at its original premises, supported by Desmond Tutu, Wole Soyinka, Ngugi Wa Thiong'o, Yinka Shonibare, Bonnie Greer, Sokari Douglas Camp and others. Following the sale of the King Street building, the Centre moved to 66 Great Suffolk Street in Southwark, where it now resides permanently.

The Africa Centre maintains a link with Covent Garden by having an annual Summer festival in August on the Piazza, since 2013.

The Centre continues to affirm its ambition to grow into the London hub for the promotion of African contemporary Art and Culture. By providing a platform for creative expressions and developing collaborations with other groups and organisations, from both the UK and Africa, the Centre aims to perpetuate its legacy as a ‘home away from home’ for Africans, that hosts events but also connects communities from diverse horizons through impactful cultural initiatives.

The Centre has created and participated in a number of events and activities for the past 50 years.

2015-2016 was a particularly successful year for the Centre with over 16 projects and activities having taken/due to take place such as:

All content from Kiddle encyclopedia articles (including the article images and facts) can be freely used under Attribution-ShareAlike license, unless stated otherwise. Cite this article:
Africa Centre, London Facts for Kids. Kiddle Encyclopedia.