Aghaviller (Irish: Áth an Bhiolair, meaning field of the watercress) National Monument, is a church and round tower in County Kilkenny, Ireland.

Aghaviller gives its name to the wider townland, civil parish, and electoral district.

Located south-east of Kilkenny, about six miles south of Thomastown near Knocktopher.

The Annals of the Four Masters call it Achadh-biorair (Ahabirrer), meaning the field of watercresses. Tighe refers to Agha-oillir, meaning field of the pilgrim. 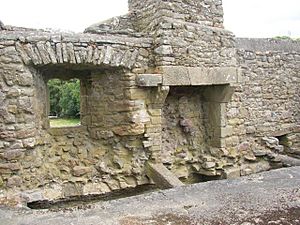 A few yards distant from the site of the old church, is the remains of the lower part of an ancient round tower composed of breccia.

The Statistical Survey of 1802, makes reference to the tower, as does the 1855 Kilkenny Archaeological Society.

It is one of five round towers located around the county, the others are at Kilkenny, Tullaherin, Kilree and Grangefertagh. The tower is different from many round towers as it has two doors. Nearby is a holy well and Castlemorres Demesne.

All content from Kiddle encyclopedia articles (including the article images and facts) can be freely used under Attribution-ShareAlike license, unless stated otherwise. Cite this article:
Aghaviller Facts for Kids. Kiddle Encyclopedia.