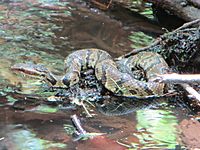 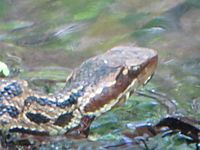 Patterning on a younger specimen

This subspecies reaches 20-48 inches (51–121 cm) in length on average but has reached 74.5 inches (189 cm). The colour is mainly dark, and the body heavy. However younger specimens have red to brown crossbands, with a lighter brown background. The crossbands are spotted and speckled, and the tail sulphur coloured. The patterning darkens with time with many older adults being completely black.

The scales are keeled and dark broad stripes on the face disguise the eyes, which cannot be seen when viewed from above, and have a vertical (cat's-eye) slit like pupil. The eye is separated from the nostril by a deep facial pit.

The United States in southeastern Virginia, the Atlantic Coastal Plain and lower Piedmont of North and South Carolina, including the banks, peninsulas and islands along the Atlantic coast, and west across Georgia (see map).

All content from Kiddle encyclopedia articles (including the article images and facts) can be freely used under Attribution-ShareAlike license, unless stated otherwise. Cite this article:
Agkistrodon piscivorus piscivorus Facts for Kids. Kiddle Encyclopedia.