In 1885, the center, originally known as "The Great Asylum for the Insane", was established as a facility for the care of the mentally ill. The main structure, a red brick edifice, was located on land near Agnew's Village, which later became part of Santa Clara. By the early twentieth century, Agnews boasted the largest institutional population in the South San Francisco Bay area, and was served by its own train station which stood at the west end of Palm Drive across Lafayette Street; the station building remained until vandalism and fire precipitated its demolition in the 1990s.

Prior to 1906, the Agnews State Hospital, constructed in 1885, was modeled after the Kirkbride Plan and designed by architect Theodore Lenzen. This building was destroyed in the 1906 San Francisco earthquake, and Agnews became infamous as the site of the Santa Clara Valley's greatest loss of life resulting from the quake. The Daily Palo Alto reported: "The position of the people in Agnews is critical; a number of insane persons having escaped from the demolished asylum, are running at random about the country." 117 patients and staff were killed and buried in mass graves on the site. The main building and some others were irreparably damaged.

Following this disaster, Agnews was rebuilt in the Mediterranean Revival architecture styles of Mission Revival—Spanish Colonial Revival, in a layout resembling a college campus of two-story buildings. It re-opened circa 1911 as Agnews State Mental Hospital. The facility was a small self-contained town, including a multitude of construction trade "shops", a farm which raised pigs and vegetable crops, a steam generating power plant for heating the buildings by steam, and even a fire department. 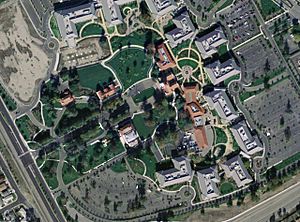 The original west campus was closed in 1998 as part of a plan to reduce and eventually close the center. When the west campus closed, the use of the land was the subject of local controversy. In April 1997, it was announced the state would sell an 82.5-acre (33.4 ha) parcel of the campus to Sun Microsystems for its corporate headquarters and R&D campus. Some objected to the arranged sale of this prime public land to a profitable corporation at the peak of a local economic and real-estate boom, while others valued the presence of a prominent high-tech employer. Also at issue was the preservation of and public access to historic Agnews Developmental Center buildings. Sun agreed to restore four of the historic buildings (the auditorium, the clock tower, the superintendent's villa, and the administration building) and to keep some of the facilities available for public use. An outdoor exhibit open to the public displays information and photographs regarding the center and its history.

In addition to the Sun deal, the Rivermark planned community was allocated 152 acres (62 ha) for a variety of residential, retail, public school, and open space uses.

The Agnews site was added to the National Register of Historic Places (under the name "Agnews Insane Asylum") on August 13, 1997.

Sun was acquired by Oracle Corporation in 2010; the campus continues to be used as an Oracle R&D facility and conference center.

In March 2009, the last patient moved out of the east campus and the residential facility was closed. The east campus provided outpatient clinic services through April 2011.

In July 2011, the Regional Project of the Bay Area and the Community State Staff Administration moved to Campbell and continued providing support to patients in the local area.

With the final sale of the land pending, the east campus was vacated and the land was turned over to the Department of General Services.

In July 2014, the City of San Jose and the Santa Clara Unified School District purchased the property from the State of California for $80 million with the intent to build a K-8, High School, and city park.

The 1984 film Birdy by director Alan Parker used the center for the facility where the title character played by Matthew Modine is incarcerated.

The 1989 horror film The Dead Pit by director Brett Leonard was shot at the eastern campus.

All content from Kiddle encyclopedia articles (including the article images and facts) can be freely used under Attribution-ShareAlike license, unless stated otherwise. Cite this article:
Agnews Developmental Center Facts for Kids. Kiddle Encyclopedia.